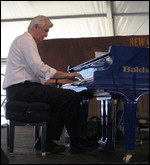 Butch Thompson (born 1943, Marine on St. Croix, Minnesota) is an American jazz pianist and clarinetist best known for his ragtime and stride performances.

Thompson was born in Marine on St. Croix, Minnesota, began playing piano at the early age of three, and began taking lessons at age six. In high school, he played clarinet in the school band. In 1962, after entering the University of Minnesota, Thompson joined the Hall Brothers Jazz Band of Minneapolis. In the following years, he took time to visit New Orleans and learn from musicians there. Thompson was one of a handful of non-locals to play at the city's Preservation Hall.

He has created musical groups including the Butch Thompson Trio and New Orleans Jazz Originals. Thompson gained a wide audience as the pianist and bandleader for A Prairie Home Companion from 1974 to 1986. The Butch Thompson Trio was formed for the radio show in 1978, and continues to perform today. Thompson and his group maintain a close relationship with the radio program and appear regularly.

In the 1970s, Thompson's recordings gained popularity in Europe. He toured the continent extensively in the 1970s and 1980s, both as a solo artist and as a band leader or member. Thompson has written for jazz publications and produces a radio show, Jazz Originals, for KBEM-FM in Minneapolis.

This article uses material from the article Butch Thompson from the free encyclopedia Wikipedia and it is licensed under the GNU Free Documentation License.