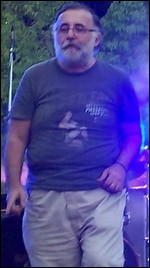 Athanasios (Thanos) Mikroutsikos (Greek: ) (1947- ), born in Patras, Greece, is one of the leading composers of popular and classical music in his home country. He studied music theory and piano at the Patras Philharmonic Society and at the Greek Conservatory and continued under Yiannis A. Papaioannou. While studying music he graduated with a degree in Mathematics from the University of Athens.

He blends a lot of musical traditions in his work, from popular to electronic. He has composed a lot of songs based on poems by Greek and foreign poets, such as Euripides, Aristophanes, Constantine P. Cavafy, Giorgos Seferis, Yannis Ritsos, Odysseas Elytis and Nikos Kavvadias as well as Bertolt Brecht, Nazim Hikmet, Wolf Biermann, Vladimir Mayakovsky and Maurice Maeterlinck. He has also written operas, symphonic music, chamber music and music for the theatre and cinema.

One of his most popular works was the setting to music of poems by Nikos Kavvadias in his albums Grammes Orizonton (Horizons' Lines) and Stavros tou Notou (Southern Cross). Some of the music was originally written for a TV series, the theme of which was marine. The songs were liked and he went on to the studio to record some more many of which were included in the aforementioned albums.

Thanos Mikroutsikos has also been involved in Greece's political life since the 60's. During the turbulent years of the military junta (1967-1974), he was persecuted by the regime for his anti-dictatorial activities and ideas. When the junta collapsed he continued being actively involved in politics as a member of the maoist EKKE, especially in the first years after the restoration of democracy.

After the elections of October 1993 he was appointed by the Panhellenic Socialist Movement (PASOK) which formed the new government, as Alternate-Minister of Culture with late Melina Mercouri as minister. In 1994, after the death of the latter, he was appointed minister of culture. He remained at this position until 1996. His brother is the popular TV host and musician Andreas Mikroutsikos.

This article uses material from the article Thanos Mikroutsikos from the free encyclopedia Wikipedia and it is licensed under the GNU Free Documentation License.