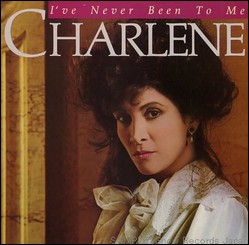 Charlene Marilynn D'Angelo Oliver (born June 1, 1950, Hollywood, California) is an American R&B singer best known as Charlene. She is known mainly for her 1982 popular song "I've Never Been to Me", and is considered a one-hit-wonder.

She was christened by her mother under the name Charlene Marilynn D'Angelo, which was later shortened to Charlene for her record label. In 1973, Charlene signed with Motown under the name "Charlene Duncan", and released her first (and unsuccessful) single "All That Love Went to Waste" in January 1974. Three years later, she released a second album, It Ain't Easy Comin' Down, on Motown's Prodigal label. The release was credited to Charlene, although an album issued the same month had "Charlene Duncan" printed on the spine (and was, confusingly, titled Charlene).[1] Another 1977 album, Songs of Love, was a repackaging of her song "I've Never Been to Me", which omitted a spoken bridge. She first released the single in 1977, but it initially had little success, reaching #97 on the pop chart.

Success of "I've Never Been to Me"

In 1982, Tampa, Florida disc jockey Scott Shannon, then at WRBQ, started playing the song at the behest of a girlfriend, by which time Charlene had lost her recording contract, moved to England and was working in a sweetshop in Ilford, London. Audience reaction was impressive, resulting in the song's second release with the original spoken bridge. The second release was a hit in England as well.

When the song was first released in the US in 1976, Charlene's legal name was Charlene Duncan from her marriage to record producer Larry Duncan; by the time the song was released in 1982, her name was Charlene Oliver by her subsequent marriage to Englishman Jeff Oliver. The single reached the top ten of the US pop and adult contemporary charts that year, and the concurrent release of her album I've Never Been to Me, was also relatively successful. The single was one of the year's biggest hits, and the video for the song was filmed at Blickling Hall, Norfolk, England and Charlene wore the wedding dress that she got married in.

"I've Never Been to Me" was featured as the opening song to the 1994 film The Adventures of Priscilla, Queen of the Desert. The song is mimed onstage by two Sydney drag queens at the Imperial Hotel in Erskineville, Sydney, Australia. The latter performance includes a scene where a plastic "baby doll" (actually a rubber chicken) is hurled into the audience by one of the performing drag queens.

The following year, Charlene released another song, "Used to Be," a duet with Stevie Wonder which the authors-composers of "I've Never Been to Me" also wrote and composed. But this did not reach the pop top 40 chart, and it only reached #46 on the pop charts. Both records were ranked the third and fourth worst records of all time by Jimmy Guterman and Owen O'Donnell in their 1991 book, The Worst Rock n Roll Records of All time. Not surprisingly, the Used to Be album, which accompanied its titular single, was not as successful as her previous album.

In 1984, Charlene released another album, Hit and Run Lover. Motown attempted to revamp her image in order to appeal to new audiences by highlighting her in a segment of the film The Last Dragon, which was under development by Motown's founder Berry Gordy. She and other Motown artists, including DeBarge and Vanity, were strategically placed in the film to appeal to the MTV craze of the time. Charlene's song "Fire" was used along with a music video depicting her as a goddess. Although the film managed to improve some of the other artists' notoriety, Charlene's appearance in the film did not catch on and she was dropped from the Motown label the following year.

Because of her one big hit, Charlene became known as a one-hit-wonder in music. She was featured on VH1's 100 Greatest One-hit Wonders show, hosted by William Shatner in 2002. Her ranking on the list was #75. In 2006, "I've Never Been to Me" was released as one of the songs on SingStar Anthems, one of the popular SingStars. Charlene has re-released the song in the form of a dance remix via download music.[3][4]

Pandora Radio features a "Charlene" channel that includes songs such as: "Johnny Doesn't Love Here Anymore," "If I Could See Myself," "Can't We Try," "Hey Mama," and others.

In 1985, the release of The Last Dragon through Motown brought together Motown signed talents. Along with artists such as Vanity, they mashed her in with a catchy pop song called "Fire." While the single was a fan favorite for die-hards, the song failed to make an impact in the musical charts. Charlene would have one last album released through Motown titled The Sky's The Limit. The album was a major shift to pop, which was far from Charlene's adult contemporary sound. By this time, Motown was turning to artists that were offering up the New Jack Swing that would dominate the late '80s and early '90s, leaving Charlene and many previous Motown artists behind.

As of 2012, Charlene was residing in her native California with her family, and she was still recording. Under the name Charlene Oliver, she launched a website of her own, where her new dance/club/house music could be downloaded, [5] and which included such new releases as "Broken Women," "California Dreamin' (Dance)," "Emotional Scars," "I Wanna Be A Woman," "I Was You," "I've Never Been To Me (Dance)," "Oh Cecilia," "Sea of Tranquility," "Spirit of Woman," "Symphony For A Broken Piano," "There I'll Be," "(Why Can't) Time Stand Still," and "Used to Be," the last of which featured Stevie Wonder. In 2012, Charlene revamped a new video, attached to her club mix of "I've Never Been To Me," which could be found such on media outlets such as YouTube. Charlene also wrote 2 books, which she also sold via her website.

In 2013, Charlene is slated to release a new album. The first single called "Heard You On The Radio," through Gotham Records became available on ITunes October 22, 2012.[6]

This article uses material from the article Charlene (singer) from the free encyclopedia Wikipedia and it is licensed under the GNU Free Documentation License.