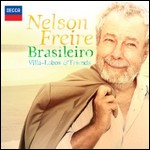 Freire began playing the piano when he was three years old.[1] He replayed from memory pieces his older sister had just performed. His teachers in Brazil were Nise Obino and Lucia Branco, former students of a pupil of Liszt. For his first public recital, at the age of four,[1] Freire chose Mozart's Sonata in A major, K. 331.

In 1957, Freire's performed Beethoven's Piano Concerto No. 5, at the age of 12. He was awarded 7th place at the Rio de Janeiro International Piano Competition. The jury in this competition included Marguerite Long, Guiomar Novaes and Lili Kraus. After this he left for Vienna to study with Bruno Seidlhofer (who was also the teacher of Friedrich Gulda). By 1964, Freire had won his first prize at the Vianna da Motta International Music Competition in Lisbon, Portugal (ex-aequo with Vladimir Krainev) and he also received the Dinu Lipatti Medal and the Harriet Cohen Medal in London, England.[2]

Freire began his international career in 1959 with recitals and concerts in the major cities of Europe, the United States, Central and South America, Japan and Israel.[2]

In Warsaw in 1999, he scored a particular triumph with his interpretation of Chopin's Piano Concerto No. 2, marking the 150th anniversary of the composer's death. In December 2001, he chaired the jury for the Marguerite Long Competition in Paris.

He has recently given performances at New York's Carnegie Hall, with the St. Petersburg Symphony Orchestra in St. Petersburg, at the Prague Spring, with the Orchestre National de France and leading orchestras in Baltimore, Boston, Montreal, New York and Utah. He has appeared with the English Chamber Orchestra (in France and Portugal) and the Orchestre de la Radio Suisse Italienne, and given recitals in Brussels, Paris, Rome, Munich, Lisbon, Luxembourg and Zurich. In 2002/2003 he made two concert tours under the direction of Riccardo Chailly, with the Royal Concertgebouw Orchestra of Amsterdam and the Orchestra Sinfonica di Milano Giuseppe Verdi. He also appeared with the Tonhalle Orchester Zurich and the NHK Symphony Orchestra of Tokyo, and regularly fulfils engagements in his native Brazil.

Nelson Freire has recorded for Sony/CBS, Teldec, Philips, and Deutsche Grammophon. He has recorded Liszt's piano concertos with the Dresden Philharmonic under Michel Plasson for Berlin Classics. Another performance, which was put onto a DVD, was a recording of four-hand and two-piano music with Martha Argerich playing, among others, the two-piano version of Ravel's La Valse.

His recording of the 24 Chopin preludes received an Edison Award.

Freire has recently signed an exclusive contract with Decca, the first result of which are recordings devoted to the works of Chopin, which have been greeted with critical acclaim, receiving the Diapason dOr, a "Choc" award from Monde de la Musique, as well as being rated a "10" by the Répertoire magazine and "recommended" by Classica. The recordings comprise, in two CDs, the 24 piano études and the 2nd and 3rd piano sonatas, as well as the Barcarolle op. 60. Subsequent Decca recordings include a 2-CD set of the Brahms piano concertos with the Gewandhaus Orchestra under Riccardo Chailly, which won the 2007 Classic FM and Gramophone awards in the Record of the Year and Concerto categories, and CDs devoted to Beethoven sonatas and Debussy, the latter including book one of the preludes.

He marked the 2011 bicentenary of the birth of Franz Liszt with a Decca CD entitled Harmonies du Soir.[4] That same year, he made a principled withdrawal from performing with the Brazilian Symphony Orchestra after it fired half its musicians.[5]

A unique youth recording (1957) of Freire at the age of 12 to 13 includes his live concert performance in the final round of the Rio de Janeiro Piano Competition of that year, which launched his career, as well as pieces he recorded immediately after the competition.

This article uses material from the article Nelson Freire from the free encyclopedia Wikipedia and it is licensed under the GNU Free Documentation License.

Tomaso Albinoni Concerto B-Dur op. 10 Nr. 1 für Violine, Streicher und Continuo
Update Required To play the media you will need to either update your browser to a recent version or update your Flash plugin.