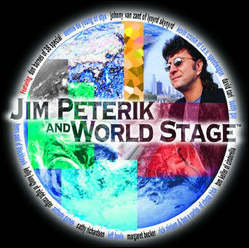 James Michael "Jim" Peterik (born November 11, 1950 in Berwyn, Illinois) is an American musician and songwriter. He is best known as a member of the band Survivor and as vocalist and songwriter of the hit song "Vehicle" by The Ides of March. He also co-wrote the anthem "Eye of the Tiger," the theme from the motion picture Rocky III.

Ides of March and early years

Peterik started performing in 1964 with some of his schoolmates in Berwyn, Illinois, as The Ides of March, named by Larry Millas "after learning about it in history class," Millas stated. Their hits included "Vehicle," "You Wouldn't Listen" and "L.A. Goodbye" in the late 1960s and early 1970s.

In 1976, he released a solo album, Don't Fight the Feeling, and toured with several of the era's most popular bands, including Heart and Boston.

Peterik formed his most successful band, Survivor, in 1978.

In the early years of Survivor, Peterik continued to co-write hits for other artists, including 38 Special and Sammy Hagar. In 1982, Sylvester Stallone commissioned Survivor to write and perform the theme song for Rocky III. This song, "Eye of the Tiger," became their defining single, spending six weeks at No. 1 on the Billboard Hot 100 and going double platinum; it also won them a Grammy Award and an Oscar nomination for Peterik and Frankie Sullivan for Best Song. This was followed by their 1984 album Vital Signs, which featured the Top 10 hits "High on You" (No. 8) and "The Search Is Over" (No. 4), plus another sizable hit in "I Can't Hold Back" (No. 13).

One song from each of Peterik's bands appears in a Stallone film (their purpose to motivate the scene's action): Survivor's "Eye of the Tiger" in Rocky III and the Ides of March's "Vehicle" in Lock Up.

In 1990, the original members of the Ides of March (Peterik, Millas, Bob Bergland, Mike Borch, Chuck Soumar, and John Larson) reunited, adding new members Scott May and Dave Stahlberg. This lineup continues to perform. Peterik continues to write for other artists such as the Doobie Brothers and Cheap Trick, as well as briefly reuniting with Survivor for another tour. "Vehicle" found new popularity when it was performed by American Idol runner-up Bo Bice in 2005.

In 2001, Peterik produced and co-wrote the first album by AOR supergroup Mecca with his long-time friend Joe Vana.

In 2003, he founded Pride of Lions with Toby Hitchcock. Peterik continues to play with The Ides of March as of 2011. His latest solo CD, Above the Storm, was released in 2006.

In 2009, Peterik appeared on The Jerry Springer Show as guest security.

In 2010, Peterik backed up the Louisiana State University Tiger Marching Band in their final halftime show of the season, at the LSU vs. Ole Miss game.

Peterik also develops and produces new talent on his own label, World Stage International. Current artists, aside from Lifeforce, include Lisa McClowry and Mallory Lennon. World Stage has two recording studios, engineered by The Ides of March co-founder and childhood friend, Larry Millas.

In 2012, Peterik both co-wrote and made an appearance on The Beach Boys' reunion album, That's Why God Made the Radio.

With The Ides of March

With Pride of Lions

This article uses material from the article Jim Peterik from the free encyclopedia Wikipedia and it is licensed under the GNU Free Documentation License.

Franz Schubert Adagio und Allegretto aus der Arpeggione-Sonate
Update Required To play the media you will need to either update your browser to a recent version or update your Flash plugin.