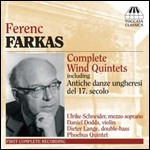 born on 15/12/1905 in Nagykanizsa, Westtransdanubien, Hungary

Born into a musical family (his father played the cimbalom and his mother played the piano) in Nagykanizsa, Farkas began his musical studies in Budapest, at the Protestant Gymnasium (Grammar School) and later attended the Music Academy, where he studied composition with Leó Weiner and Albert Siklós.

After his graduation in 1927, he worked as a repetiteur and conductor at the Municipal Theatre of Budapest and collaborated with the Diaghilev Ballet. From 1929 to 1931, he attended Ottorino Respighi's masterclass at the Accademia Nazionale di Santa Cecilia in Rome. The years he spent in Rome had a decisive influence on him. He became acquainted with Italian and Mediterranean culture to which he felt a deep attraction. About this he said: "My principal aim has always been to attain for myself a latin clarity and proportion.".[1]

Farkas returned to Budapest in the autumn of 1931. As he could not find any other assignments, he played the piano in various theatre orchestras. In 1932 he met the director Paul Fejos for whom he composed several film scores, first in Hungary, then in Vienna and Copenhagen. This collaboration was to be for Farkas the beginning of an impressive series of “applied” music (music for around 75 films and 44 theatre plays and radio plays).

In the spring of 1934 he conducted research of his own into traditional Hungarian music by collecting folk songs in Somogy County: "When I got back from my travels abroad, it became clear to me that the work and research of Bartók and Kodály raised crucial problems that we as Hungarians, had to resolve ourselves. ".[1]

From 1935 he taught at the Budapest City Music School. From 1941-44 he was professor of composition and director at the Conservatory of Kolozsvàr (today Cluj-Napoca in Romania) and he conducted the city's Opera Chorus. At the end of 1944, because of the war, he had to go back to Hungary. During the siege of Budapest, he worked as the deputy conductor of the Opera Chorus.

In 1946, he was sent to Székesfehérvár where he founded and managed the Conservatory. He was nominated professor of composition at the Franz Liszt Music Academy of Budapest in 1949, a post he held until his retirement in 1975. As a professor he was to have his greatest influence in the second half of the century. Among his students were: György Kurtág, György Ligeti, and Miklós Kocsár.

"From the beginning, I have been involved in all areas of music ; I have not wanted to create only a small corner of a room, full of atmosphere, with a personal and sophisticated taste, but spaces, large and small, arranged differently, pleasant to live in, with open windows".[1]

Farkas's works include over seven hundred opuses. He composed in all genres, opera, ballet, musicals and operettas, orchestral music, concertos, chamber music and sacred music. His wide literary culture enabled him to set words to music in 13 languages, stemming from about 130 writers and poets both ancient and modern.

Most of the works mentioned below are accompanied by an external link referring to a single source: the official website of Ferenc Farkas (see "External Links") which provides a detailed description of the work and a musical extract.

This article uses material from the article Ferenc Farkas from the free encyclopedia Wikipedia and it is licensed under the GNU Free Documentation License.

Ludwig van Beethoven Deutscher Tanz Nr. 12 C-Dur WoO 8
Update Required To play the media you will need to either update your browser to a recent version or update your Flash plugin.