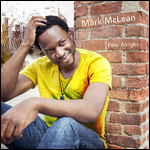 Mark McLean ( muh-K L EE N-';[1]) born February 5, 1975 in North York, Ontario is a Canadian musician, drummer, composer, lyricist and studio musician. McLean lives and works primarily in New York. He has released three albums under his own name. The first showcases his arrangements of jazz standards while his later albums are original material (except one song). His very early influence was his father's record collection, which included every genre: from Johann Sebastian Bach to James Brown. McLean is becoming known as the "drum whisperer"[2] in part because he can coax organic sounds out any drum kit. McLean is musically multilingual: jazz, rhythm and blues, funk, pop or any genre required for the song.[3]

McLean's great uncle, Cy McLean was one of the first black band leaders in Canada. His brother Lester McLean[4] is an accomplished saxophonist and vocalist in the Toronto jazz and RnB scene.

McLean began his career at age nine as a gifted classical pianist, but by age 14 had started a second career playing the drums. By the time he was 18, the drums eclipsed the piano as McLeans voice for musical expression and the age of 22 he was playing with fellow Canadian and jazz icon, Oscar Peterson.[5]

McLean graduated with honors from The University of Toronto[6] with a Bachelors of Performance in Jazz. In his third year faculty member Don Thompson invited him to play on the first of the more than 70 recordings on which McLean appears. He was also named Post-secondary Musician of the Year by the Jazz Report Magazine in 1998.[7] That summer McLean taught at Canadas Interprovincial Music Camp (jazz). He was also the jazz director at Sir John A. Macdonald Collegiate Institute while taking his undergraduate degree.

McLean moved to New York City in 1999 following receipt of a grant awarded him by the Canada Council for the Arts. Initially, McLean wanted to study with his idol, world renowned drummer, Brian Blade. Although he did not teach, Blade[3] mentored McLean by allowing him to observe his performances. He even helped him shop for a drum kit and as luck would have it, they walked into Drummers World on 46th street in Manhattan and met jazz drummer, archivist and radio personality, Kenny Washington. Blade said to McLean this is who you should study with. McLean studied with Kenny Washington for a year followed by an additional year with drummer Billy Kilson. After that McLean decided to stay for future opportunities in New York. Singer and pianist Andy Bey was the first to call, then Dewey Redman.

This article uses material from the article Mark McLean from the free encyclopedia Wikipedia and it is licensed under the GNU Free Documentation License.