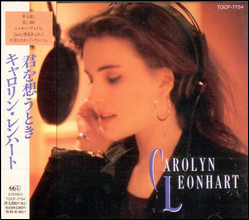 Carolyn Leonhart (born 10 July 1971) is a jazz singer, daughter of jazz bassist Jay Leonhart and sister of the trumpeter Michael Leonhart. She has performed as a back-up vocalist for Steely Dan on several tours and recordings. She is married to saxophonist Wayne Escoffery.

Carolyn Leonhart was born in New York City on 10 July 1971, daughter of bassist and composer Jay Leonhart and vocalist Donna Leonhart.[1] She was exposed to music from a very early age, attending her father's gigs where she saw him accompany famous singers such as Sarah Vaughan, Mel Tormé and Peggy Lee.[2] Leonhart sang on television commercials as a young child. She attended The High School of Music & Art in New York City, and for four years sang in the school's Gospel Choir. While at school, she performed in the TV show "It's Showtime At The Apollo".[3] At home she would spend hours singing while her father and brother played jazz standards. She won the Lena Horne High School Jazz Vocalist competition while in her senior year.[2]

Leonhart attended the University of Rochester, obtaining a degree in Comparative Religion. While at university she remained deeply involved in music, singing with bands at the Eastman School of Music in Rochester. She recorded two solos with the Toshiba EMI label, and in her senior year was named Best College Jazz Vocalist by Downbeat Magazine.[2]

Leonhart returned to New York and in 1994 began singing in jazz clubs. That year she competed in the Thelonious Monk International Vocal Jazz Competition, coming third.[3] A critic said her choice of the songs "Nobody Else but Me" and "Day Dream" was daring, but she needed greater control and more focused delivery.[4] In the following years Leonhart performed with a variety of musicians including The Real Live Show, a hip-hop group, and Wax Poetic.[2] The Wax Poetic project combines electronica, trip hop, funk, and jazz.[5] In 1998 she recorded an album with the Swiss Percussion Ensemble, a group of four classical percussionists whose instruments were mainly made of glass. In 2000, Leonhart released the album Steal The Moon, a collaborative project with pianist and composer Rob Bargad. Since then she began performing regularly with her own group at the Smoke Jazz Club in New York City, at Steamers and The Vic in California, and at other clubs on the east coast.[2]

Leonhart and other members of the Swiss Percussion Ensemble formed Lyn Leon, a pop/lounge group that made several successful tours of Europe and released the album Glass Lounge in Germany in 2004. Lyn Leon toured with the jazz singer Al Jarreau during the fall of 2004. Leonhart said "Improvising with Al Jarreau was one of the most incredible experiences of my life. It opened me up to another level of creative awareness and expression". Between 2000 and 2007 Leonhart was a lead back-up vocalist with Steely Dan, singing on three world tours and two albums.[2] She performed again with Steely Dan in 2009 and 2011.[3]

Leonhart met Wayne Escoffery, a London-born saxophonist, in a New York Jazz club in 2002. The two began dating when they had time during their busy tour schedules. They married in Manhattan on 17 January 2004.[6] Leonhart studied Contemporary Commercial Music Vocal Pedagogy Institute at Shenandoah University. In recent years she has become an Assistant Professor at the Berklee College of Music in Boston, Massachusetts. Her goal as a teacher is to help vocal students gain an awareness of their instrument, their voice, avoid mistakes and learn better, freer vocal function.[7]

Leonhart has said that she does not consider herself a jazz singer, just a singer, and she has performed with ensembles covering a wide range of musical styles. She was deeply influenced by her father and by Donald Fagen and Walter Becker of Steely Dan. She says that other influences include Wayne Shorter, Woody Shaw, Ahmad Jamal, Herbie Hancock, Miles Davis and John Coltrane. She has been described as having an "intimate and soulful voice and broad tonal palette ... a singer who works intuitively, with a voice that projects both strength and vulnerability".[2]

This article uses material from the article Carolyn Leonhart from the free encyclopedia Wikipedia and it is licensed under the GNU Free Documentation License.