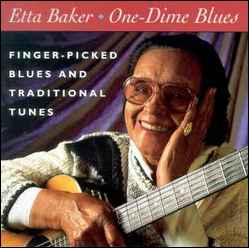 She was born Etta Lucille Reid in Caldwell County, North Carolina, of African American, Native American, and European American heritage.[1] She played both the 6-string and 12-string forms of the acoustic guitar, as well as the five-string banjo. Baker played the Piedmont Blues for ninety years, starting at the age of three when she could not even hold the guitar properly. She was taught by her father, Boone Reid, who was also a longtime player of the Piedmont Blues on several instruments. Etta Baker was first recorded in the summer of 1956 when she and her father happened across folk singer Paul Clayton while visiting Cone Mansion in Blowing Rock, North Carolina, near their home in Morganton, NC. Baker's father asked Clayton to listen to his daughter playing her signature "One Dime Blues". Clayton was impressed and arrived at the Baker house with his tape recorder the next day, recording several songs.[2]

Baker had nine children, one of whom was killed in the Vietnam War in 1967, the same year her husband died. She last lived in Morganton, North Carolina, and died at the age of 93 in Fairfax, Virginia, while visiting a daughter who had suffered a stroke.

This article uses material from the article Etta Baker from the free encyclopedia Wikipedia and it is licensed under the GNU Free Documentation License.