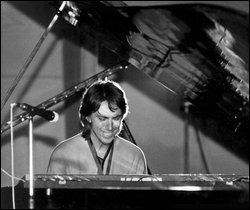 Kuryokhin began his acting career as a piano and keyboard player with a school band in Leningrad. After playing with professional jazz-bands as well as popular rock musicians, Kuryokhin went through several stages in his career, and eventually became one of the most recognisable names and faces in Russia during the 1980s and 1990s.

By the end of his life, he had emerged as an avant-garde film composer, performance artist and film actor. Outside Russia he is primarily known as a jazz and experimental musician, through his works released since 1981 on UK's Leo Records, as well as his concert tours with Ensemble Pop-Mekhanika and his happening show also titled Pop Mekhanika. He also made a significant contribution to several albums (in particular: Triangle, Taboo and Radio Africa) of the famous Russian rock band Aquarium.

His memorable film works include starring in (and composing music for) Two Captains II ( II), a comedic pseudo-documentary about World War I; the soundtrack to the neo-noir Russian horror film, The Designer (Russian: ), and the lead role of the combative nerd taking on the local mob, in Lokh pobeditel vody.

Kuryokhin shot to fame after creating one of the first popular media viruses in the Russian media. It was one of his semi-improvised acts of performance art, broadcast live on Russian television in May 1991. As a guest on the popular talk show Fifth Wheel, Kuryokhin provided "proof"[1] that Lenin was a mushroom.[2] During the 1990s, Kuryokhin was a board member of the St. Petersburg City Council for Culture and Tourism. In 1995 Kuryokhin joined the National Bolshevik Party.[3]

He died of a rare heart condition, cardiac sarcoma, aged 42 in 1996, and was laid to rest in the Komarovo Cemetery, near the tomb of Anna Akhmatova.

This article uses material from the article Sergey Kuryokhin from the free encyclopedia Wikipedia and it is licensed under the GNU Free Documentation License.