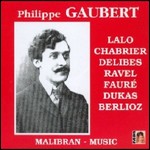 Philippe Gaubert (5 July 1879 8 July 1941) was a French musician who was a distinguished performer on the flute, a respected conductor, and a composer, primarily for the flute.

Gaubert was born in Cahors in Southwest France. He became one of the most prominent French musicians between the two World Wars. After a prominent career as a flautist with the Paris Opéra, he was appointed in 1919, at the age of forty, to three positions that placed him at the very center of French musical life:

In 1907 he participated in the first performance of Maurice Ravel's Introduction and Allegro for harp, flute, clarinet and string quartet. Among his recordings as conductor, one that he made of Franck's Symphony in D Minor (with the Conservatoire forces) is particularly notable.

Gaubert's compositions are by no means especially innovative, but his work benefited from the examples of Franck, Ravel, and Debussy. Naïla, his opera in three acts, premiered at the Paris Opéra on 7 April 1927. Three of his ballets had their first performances at that venue, as well.

During 1941, Gaubert died of a stroke while in the French capital. His friend, the journalist Jean Bouzerand, convinced the town of Cahors to create a public garden named in his honor near the river Lot in the late 1930s. When Gaubert was still alive, Albert Roussel dedicated the movement 'Monsieur de la Péjaudie' in his piece 'Joueurs de Flûte' to him.

This article uses material from the article Philippe Gaubert from the free encyclopedia Wikipedia and it is licensed under the GNU Free Documentation License.