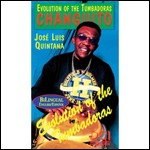 Quintana was born in 1948 in Casablanca, Cuba.[1] As a child he played professionally in bands such as Havana Jazz (joining aged 8), with his musician father, and with La Pandilla de los Cabezas de Perros.[1] At the age of 13, he volunteered for military service and played in army bands, serving for three years, during which he also played in the jazz band Estrellas de Occidente.[1] His mother died when he was 17 years old. In 1964 he joined the popular band Los Harmonicos, followed by a year in Sonorama 6, and spells as drummer in Souvinir and La Orchestra de Musica Moderna.[1]

In 1970 he joined Los Van Van.[1] They created the songo, where a combination of percussion instruments (timbales, cowbells, wood blocks, electronic drums and cymbals) and hand techniques are characteristic.

He first recorded as a solo artist in 1992 and became recognized as a teacher of percussion.[1] In 1996 Changuito was nominated for a Grammy award for his work with Carlos "Patato" Valdes and Orestes Vilato, produced by Greg Landau.[1][2] This was his first recording in the United States and it highlighted many aspects of his playing overlooked in his Van Van recordings. He also played on a recording with Greg Landau accompanying Puerto Rican poet Piri Thomas along with Patato and Orestes. He has also contributed to recordings by Hilario Duran.[3]

In the 1970s Changuito developed the technique of simultaneously playing timbale and bongo bell parts when he held the timbales chair in Los Van Van. The example below shows the combined bell patterns (written in a 2-3 clave sequence).

This article uses material from the article Changuito from the free encyclopedia Wikipedia and it is licensed under the GNU Free Documentation License.