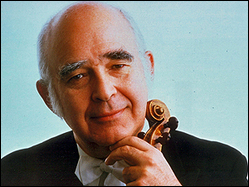 As a youth, Silverstein studied with his father, Bernard Silverstein, who was a public school music teacher. He later studied at the Curtis Institute of Music with Efrem Zimbalist, and also studied with William Primrose, and Mischa Mischakoff.

In 1962, Silverstein became concertmaster of the Boston Symphony Orchestra, a position he held for 22 years. He was appointed assistant conductor in 1971. He was music director of the Utah Symphony from 1983 to 1998. He served as acting music director of the Florida Philharmonic Orchestra in 2001 until the orchestra's demise in 2003. He was the artistic advisor to the Portland Symphony Orchestra in 2007-2008 season. He has served as a professor of violin at the Curtis Institute of Music in Philadelphia, following his position at the New England Conservatory in Boston. Since 1969, he has been a regular faculty artist at the Sarasota Music Festival.[1]

This article uses material from the article Joseph Silverstein from the free encyclopedia Wikipedia and it is licensed under the GNU Free Documentation License.

Wolfgang Amadeus Mozart Konzert für Flöte, Harfe und Orchester C-Dur KV 299
Update Required To play the media you will need to either update your browser to a recent version or update your Flash plugin.