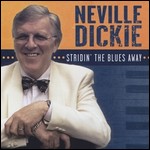 Neville Dickie (born 1 January 1937, Durham, England [1]) is an English boogie-woogie and stride piano player.[1] He has performed all over Europe and North America.

After serving in the RAF, Dickie left Durham and moved to London, where he began playing piano for small wages in various pubs. It was only after Doreen Davies, who was head of BBC Radio 2, noticed him at a BBC audition that he took a notable stride in his musical career.[1] He has played on hundreds of BBC Radio broadcasts.

Dickie has produced scores of records and can be heard on hundreds of jazz recordings, as well as several recordings with the French pianist, Louis Mazetier. Dickie had a Top 40 UK hit single in 1969 with "Robin's Return" on the Major Minor Records label (MM 644). It reached number 33 on the UK Singles Chart.[2]

His album Back to Boogie (1975) has sold over 100,000 copies.[1] Dickie formed a band called the Rhythmakers in 1985 and continues to perform with that group and with his trio.[1] He appears regularly at festivals in the United States.

This article uses material from the article Neville Dickie from the free encyclopedia Wikipedia and it is licensed under the GNU Free Documentation License.