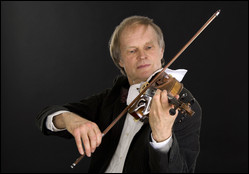 Alexandre Dubach (born 1955 in Thun) is a Swiss violinist.

Dubach began studying violin under Elisabeth Schöni at the age of 7. Within two years, he won the Concours National of the 1964 EXPO in Lausanne, followed by appearance on television and radio around Switzerland. He proceeded to study under Eva Zurbrügg, Ulrich Lehmann, Yehudi Menuhin, Nathan Milstein, Magda Lavanchy and Salvatore Accardo.[1]

At 15 he gave his debut performance of Mendelssohn’s Violin Concerto with Armin Jordan and the Tonhalle Orchester Zürich, where he returned regularly as soloist and from 1981-1985 also as leader.

In 2007 Dubach performed the Swiss national premiere of Niccolò Paganini's Third Violin Concerto.[3] His Claves recording of Paganini’s 6 violin concertos[4] with the Orchestre Philharmonique de Monte Carlo [5] has won great acclaim, including a listing in Jaoachim Hartnack’s Great Violinists of our Time.[6]

Alexandre Dubach has taught in Castel del Monte, Zürich (at the master classes after A. Grumiaux and N. Milstein), Delémont and Sion and is also in great demand as a teacher in eastern Europe.[7]

In 2012 it was reported that he forgot a valuable Stradivarius violin he had borrowed from the befriended owner in a railway train while returning from a long concert evening. The violin was subsequently returned by the finder.[8]

This article uses material from the article Alexandre Dubach from the free encyclopedia Wikipedia and it is licensed under the GNU Free Documentation License.

Antonio Vivaldi Gitarrenkonzert C-Dur
Update Required To play the media you will need to either update your browser to a recent version or update your Flash plugin.