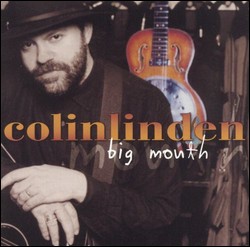 Linden is a very versatile guitarist, both on acoustic and electric guitars, specializing in slide guitar and country blues and Ragtime fingerpicking. He frequently collaborates with country and folk performers.[1] He is also a member, with Stephen Fearing and Tom Wilson, of the group Blackie and the Rodeo Kings.

When the family moved back to Toronto, Linden became interested in performers such as Taj Mahal, Mississippi Fred McDowell and Howlin' Wolf. When Howlin' Wolf played at Torontos Colonial Tavern, the then-11-year-old Linden spent three hours talking with the elder bluesman.[2] A young Linden began performing at a local coffee house, the Fiddlers Green Coffee House, singing and strumming a guitar. By 1973, Linden began learning how to finger pick. When Linden met David Wilcox, Linden decided to learn how to play slide guitar. Wilcox gave 140 blues albums to young Linden, to help Linden to learn about blues styles.

Paul Mills, the producer of Sylvia Tysons Touch the Earth show, at the Winnipeg Folk Festival and an outlet on CBC Radio for acoustic roots music, booked Linden in 1975 .[2] At the Winnipeg Folk Festival, Colin met Mississippi bluesman Sam Chatmon, and later that year made a pilgrimage to US to meet South Detroit's Sippie Wallace. North Carolina's Peg Leg Sam, and Mississippi's Son House.

In 1976 Wilcox had asked Linden to join his band, the Teddy Bears, which meant that Linden had to learn to play the electric guitar. In 1977, he played solo gigs and did his first western Canadian tour, which was booked by Holger Petersen. In Edmonton he met then 13-year-old Colin James, also a budding blues performer. In the late 1970s, Linden formed his own group, the Group du Jour, which played a mix of covers and a few Linden originals, and a group called The Lucky Charms, which was featured on his first album "Colin Linden Live!!!!!" (1980) . In 1979, Linden recorded the Sam Chatmon album.[2]

In August 1980, Linden recorded his album Colin Linden Live!. As well, he played as a sideman for Joe Mendelson, Willie P. Bennett, Gwen Swick and Amos Garrett.[2] Linden's second album, Colin Linden and the Immortals was released by the Stony Plain Records label in 1986.[2] Linden has acknowledged the influence of The Band. In the early 1980s, Linden met three of the original members, Rick Danko, Garth Hudson and Levon Helm. Members of The Band contributed to Linden's recordings, and songs like "When the Spirit Comes" got radio airplay and "Miles Away from You" made the rock charts.[1] When the Spirit Comes was released by A & M in 1987. Linden signed a publishing deal with Warner Chappell and did producing for Mendelson Joe, Morgan Davis, Jackson Delta and Hans Thessink.[2]

In 1991, Bruce Cockburn recruited Linden as a sideman, and for three-and-a-half years, Linden playing guitar. Subsequently, Linden became Cockburn's co-producer.[3] Linden's blues album of 1993 titled South at Eight, North at Nine was distributed by Sony Music in Canada,[1] and won a Juno Award in the Blues and Gospel category. Guests on the album included Bruce Cockburn as well as Rick Danko, Garth Hudson and Levon Helm of the Band.[1]

As Linden got more interested in gospel records, he began taking vocal lessons from Bourbon Tabernacle Choir singer Dave Wall, such as breathing and warm-up exercises.

In 1996, Linden won a Juno in the Blues/Gospel category for his producing Lennie Gallant's The Open Window. Linden co-wrote Colin James' hit song "Real Stuff".[4] As well, and, Linden joined with Tom Wilson of Junkhouse and Stephen Fearing to form Blackie and the Rodeo Kings. This band was a tribute to Canadian singer songwriter Willie P. Bennett. After the album High or Hurtin' on True North Records, the second album Kings of Love won a Juno.[2]

In 2000 Linden won three Juno awards, of which the "Blues" category award was as the producer of Ray Bonneville's Gust of Wind. In the Roots and Traditional: Solo Artist category, Linden won as the producer of Bruce Cockburn's Breakfast in New Orleans, Dinner in Timbuktu. Finally, in the Roots and Traditional: Group category, Linden won as a member of Blackie and the Rodeo Kings.[2] In 2000, Linden produced Sue Foley's Love Comin' Down and Paul Reddick and the Sidemen's Rattle Bag.

For the album Big Mouth, a more acoustic recording, Linden recruited Keb' Mo', Bruce Cockburn, and other musicians. In 2002 Big Mouth won a Juno for Best Blues Album. In 2002, an album Linden worked on, Timeless, won the Grammy for Country Album of the Year.[1] In 2002, he co-produced Stephen Fearing's That's How I Walk and Bruce Cockburn's You've Never Seen Everything. In 2003, a third Blackie and the Rodeo Kings album, BARK, was released, and in 2006 they released Let's Frolic and Let's Frolic Again.[2]

This article uses material from the article Colin Linden from the free encyclopedia Wikipedia and it is licensed under the GNU Free Documentation License.

Sir William Herschel Allegro assai aus der Sinfonie Nr. 13 D-Dur
Update Required To play the media you will need to either update your browser to a recent version or update your Flash plugin.