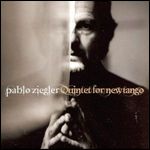 Pablo Ziegler (born September 2, 1944) is an Argentine composer based in Buenos Aires and New York City. He is currently the leading exponent of nuevo tango, thanks to the skills and reputation he gathered while working extensively as Ástor Piazzolla's regular pianist from 1978 until the maestro's retirement for health reasons in 1989. He played with Piazzolla's re-formed Conjunto 9 in 1983 for his Teatro Colón concert with the Buenos Aires Philharmonic. In 1985 Ziegler composed the music for the film Adios Roberto, and in 1990, he established the New Tango Quartet.[1]

His playing style, both sharply percussive and metallically lyrical, is instantly recognizable and bears some similarities to that of Vladimir Horowitz as well as some of the wistfulness of Bill Evans. As a composer he has taken Piazzolla's contrapuntal approach to tango music and added more jazz influence, notably with the regular use of a drumkit, lighter harmonies similar to those used in Bossa Nova, and extended passages of improvisation. Having created a bridge between Jazz and improvisation and the New Tango personified by Piazzolla, he has been more successful with his album Bajo Cero.[1]

His recordings with Piazzolla include most notably:

His recordings as bandleader:

This article uses material from the article Pablo Ziegler from the free encyclopedia Wikipedia and it is licensed under the GNU Free Documentation License.

Johann Friedrich Fasch Menuett 1 und 2 aus der Suite B-Dur
Update Required To play the media you will need to either update your browser to a recent version or update your Flash plugin.