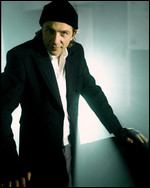 Carsten Dahl (October 3, 1967 in Copenhagen, Denmark) is a Danish Jazz pianist, married to the tenor saxophonist Christina Dahl (b. Nielsen in May 20, 1967). "Dahl is a truly great pianist" Chris Mosey said, in his All About Jazz review of Dahl's CD In Our Own Sweet Way released in 2009 with Alex Riel and Mads Vinding.[1]

Dahl, nine years old, started to play drums. He studied at the Copenhagen Jazz Conservatory for two years before he turned his eyes on piano in which he never had any previous training. He wanted to be a Jazz musician who could play Bebop. His role models, at the time, were two of Jazz greats, namely Bud Powell and Wynton Kelly while he also had an interest in Classical music. Dahl ones said:

As a leader, he played and recorded with his own Carsten Dahl trio and Carsten Dahl Experience. He is also one of the most sought-after Jazz pianists as a sideman who worked/recorded with Ed Thigpen, Lars Danielsson, Arild Andersen, Ulf Wakenius, Bent Jædig, Miroslav Vitous, John Tchicai, Marc Ducret, Ray Anderson and Randy Brecker, Joe Lovano, Hugo Rasmussen and Bob Rockwell were among others.

Dahl won Ben Webster Prize in 1997.[2] The Ben Webster Prize is an annual Jazz Award set up by the Ben Webster Foundation to honour Danish and American Jazz musicians as well as other professionals active in the promotion of Jazz in those countries.[3] Dahl signed up with the music publishing house Edition Wilhelm Hansen in 2008.[4]

This article uses material from the article Carsten Dahl from the free encyclopedia Wikipedia and it is licensed under the GNU Free Documentation License.

Enrique Granados Danza espanola Nr. 5 "Andaluza"
Update Required To play the media you will need to either update your browser to a recent version or update your Flash plugin.