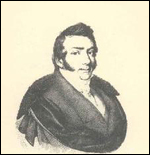 Life and career as a composer

Born at Tolentino, he grew up in Pesaro, and studied music there until his parents sent him to Rome to study law. Having no intention of becoming a lawyer, he took voice lessons and eventually studied counterpoint with Giuseppe Jannaconi, an important Roman composer. When Vaccai turned twenty one, he went to Naples and became a disciple of Paisiello, whose Barber of Seville was considered a comic masterpiece until Rossini's Barber swept it from the stage 35 years later.

Vaccai launched his career in Venice, initially earning his living by writing ballets and teaching voice. He had his first operatic success with I solitari di Scozia in Naples in 1815. In Parma he was commissioned to write Pietro il grande, where he was also one of the soloists in the first performance. This was followed by Zadig e Astartea (Naples, 1825) and then his best known opera Giulietta e Romeo (Milan, 1825).

Vaccai's sojourn in London began with a production of his most successful opera, Romeo and Juliet, at Kings Theatre in April, 1832. His charm and continental reputation ingratiated him to society and soon he was much sought after as a teacher.

Ending his wanderings with a return to Italy, Vaccai became a director and professor of composition at the Milan Conservatory in 1838. After six years he retired on account of poor health to his boyhood home, Pesaro, where he wrote his sixteenth opera. He died there in 1848.

Work as a teacher of singing: his Metodo pratico de canto

Later eclipsed by his rival Bellini, Vaccai is now chiefly remembered as a voice teacher. One of his notable students was soprano Marianna Barbieri-Nini. Vaccai wrote many books, one of which is his 1832 Metodo pratico de canto (Practical Vocal Method), which has been transposed to accommodate different voice types such as alto or low ranges such as bass in order to instruct students in the method of singing in the Italian legato style. It is still in print and may be used as a teaching tool.

In his introduction, Vaccai notes that only the voice of a master demonstrating his exercises accurately can instruct a student in the correct techniques of true legato singing. The book is also an important source of information about the performance of early 19th-century opera.

Voice teacher Elio Battaglia edited a new teachers edition of the "Metodo practico" or Practical Method of Italian Singing which was published by Ricordi in 1990 and which was accompanied by a CD of examples.

This article uses material from the article Nicola Vaccai from the free encyclopedia Wikipedia and it is licensed under the GNU Free Documentation License.