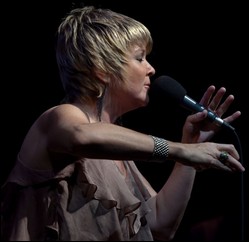 Karrin Allyson (pronounced KAH-rin; born Karrin Allyson Schoonover on July 27, 1963 in Great Bend, Kansas) is an American jazz vocalist. She has been nominated for five Grammy Awards, and has received positive reviews from several prominent sources, including the New York Times, which has called her a "singer with a feline touch and impeccable intonation."[1]

Karrin Allyson was born in Great Bend, Kansas; her father was a Lutheran minister and her mother was a psychotherapist, teacher and classical pianist.[2] She grew up in Omaha, Nebraska, and spent her last year of high school in San Francisco. In her youth she studied classical piano, sang at her local church and in musical theatre, and also began songwriting.

Allyson attended the University of Nebraska at Omaha on a classical piano scholarship; she majored in classical piano and minored in French. She was lead singer for an all-female rock band called Tomboy. She also developed an avid interest in jazz, performing both in a jazz swing choir in college and in her own jazz ensemble, which had gigs at venues in Omaha.[2][3]

After graduating from college in 1986, Allyson moved to Minneapolis and concentrated on her jazz career. In 1990, she moved to Kansas City, where her career took off. In 1992 she recorded her debut album, I Didn't Know About You, which was so well received it was re-released on Concord Records in 1993.[2] She subsequently recorded eight more Concord-released albums in Kansas City. In 1998, she moved to New York City with her longtime partner, classical music radio host Bill McGlaughlin, whom she met in Kansas City in the early 1990s.

Allyson sings in English, French, Portuguese, Italian, and Spanish. The songs she performs are drawn from a variety of genres, including bossa nova, blues, bebop, samba, jazz standards, and other jazz modalities, and also ballads, pop standards, the Great American Songbook, soft rock, and folk rock. She has also recorded vocal performances of several instrumental jazz compositions, using both scat and vocalese techniques. She has recorded 12 original studio albums for the Concord Jazz label, and in 2009 she released a career-spanning "best of" collection.

This article uses material from the article Karrin Allyson from the free encyclopedia Wikipedia and it is licensed under the GNU Free Documentation License.