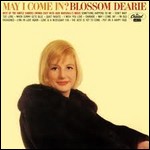 Margrethe Blossom Dearie[1][a][2] (April 28, 1924 – February 7, 2009) was an American jazz singer and pianist.[3] She was physically petite, with a recognizably light and girlish voice.[4][5][2][3] One of the last supper club/cabaret performers,[3] she performed regular engagements in London and New York City over many years.[4][2] She collaborated with many musicians, including Johnny Mercer, Miles Davis,[3][6] Jack Segal, Johnny Mandel, Duncan Lamont, Bob Dorough, and Dave Frishberg.[7]

Margrethe Blossom Dearie was born on April 28, 1924,[b] in East Durham, New York,[8] to a father of Scots Irish descent and a mother of Norwegian descent.

She reportedly received the name Blossom because of "a neighbor who delivered peach blossoms to her house the day she was born",[9] although she once recalled it was her brothers who brought the flowers to the house.[1]

After high school, Dearie moved to New York City[7] to pursue a music career. Dropping her first name,[2] she began to sing in groups such as the Blue Flames (with the Woody Herman Orchestra)[1] and the Blue Reys (with Alvino Rey's band) before starting her solo career.[4]

Dearie moved to Paris in 1952. She formed a vocal group, the Blue Stars (1952–1955),[1][5] which included Michel Legrand's sister, Christiane, and Bob Dorough. In 1954 the group had a hit in France with a French-language version of "Lullaby of Birdland",[1] arranged by Michel Legrand.[6] The Blue Stars would later evolve into The Swingle Singers.[6] On her first solo album, released two years later, she played the piano but did not sing.[4]

One of Dearie's most famous song recordings from that period is "The Riviera", with music by Cy Coleman and lyrics by Joseph McCarthy, in 1956.[4]

After returning from France in 1957,[1] Dearie made her first six American albums as a solo singer and pianist for Verve Records in the late 1950s and early 1960s,[10] mostly in a small trio or quartet setting. Dave Garroway, host of The Today Show and an early fan of Dearie, featured her on several occasions, increasing her exposure with the popular audience.[11] In 1962, she recorded a radio commercial for Hires Root Beer. As it proved very popular, the LP Blossom Dearie Sings Rootin' Songs was released[12] as a premium item that could be ordered for one dollar and a proof of purchase.

In 1964, she recorded the album May I Come In? (Capitol/EMI Records).[10] It was recorded (atypically for her) with an orchestra. During this same period, she performed frequently at New York supper clubs and in 1966 made her first appearance at Ronnie Scott's club in London. She recorded four albums in the United Kingdom during the 1960s that were released on the Fontana label, including a recording of her 1966 performance at Ronnie Scott's.[10]She also performed regularly on Bernard Braden's TV show.

After a period of inactivity, Dearie recorded the album That's Just the Way I Want to Be (containing the cult song "Dusty Springfield", an ode to the British pop star, co-written by Dearie with Norma Tanega), which was released in 1970. In 1974, Dearie established her own label, Daffodil Records, which allowed her to have full control of the recording and distribution of her albums. Dearie appeared on television throughout her career, most notably giving her voice to the children's educational series Schoolhouse Rock!. Some of her pieces in this series were written by her good friend Bob Dorough, the jazz singer and composer with whom she performed in Paris in the 1950s. Her voice can be heard on "Mother Necessity", "Figure Eight", and "Unpack Your Adjectives".[13][14]

The songwriter Johnny Mercer, with whom Dearie collaborated for her 1975 song "I'm Shadowing You",[5] gave one of his final compositions to her for the title song of her 1976 Daffodil album My New Celebrity is You.[9][15] According to Dearie, she and Mercer were close friends.[1]

In 1983, Dearie was awarded the first Mabel Mercer Foundation Award.[7]

Dearie's voice and songs have been featured on the soundtracks of several films, including Kissing Jessica Stein, My Life Without Me, The Squid and the Whale, The Adventures of Felix, and The Artist. She also recorded songs with other singers, including Lyle Lovett. She continued to perform in clubs until 2006.[5] Among her most requested songs were "Peel Me a Grape", "I'm Hip" and "Quality Time" by Dave Frishberg.

She appeared regularly on British television with Peter Cook and Dudley Moore,[6] several times as a guest of Jack Paar on his Tonight show and also appeared on The Danny Kaye Show, The David Frost Show, and The Merv Griffin Show.[9][14][6]

Dearie lived in Paris during the early 1950s; here she met and in 1954 married Bobby Jaspar, a Belgian flutist and saxophonist.[9] The marriage ended in divorce in 1957.[16] She never married again.

On February 7, 2009, after a long illness[7] and failing health,[9] Dearie died in her sleep[9] of natural causes[5] at her apartment on Sheridan Square[17] in Greenwich Village, New York City, according to her representative and manager Donald Schaffer.[5][7] She was survived by her older brother Barney as well as a nephew and a niece.[5][2] She was cremated and her ashes were interred in Falls Church, Virginia.[18]

This article uses material from the article Blossom Dearie from the free encyclopedia Wikipedia and it is licensed under the GNU Free Documentation License.