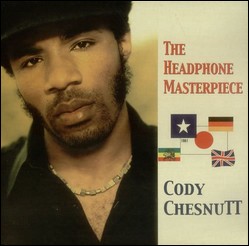 Chesnutt's music blends elements of rock, funk, soul, hip hop, and blues. After relocating to Los Angeles, Chesnutt found work with Death Row records, writing and producing five songs for the male R&B group Six Feet Deep. Chesnutt and his former band, The Crosswalk, had a brief stint with Hollywood Records in which they were later booted from the label. The band subsequently broke up and Chesnutt released a double LP in 2002 entitled The Headphone Masterpiece, which was recorded on a 4-track cassette recorder in his bedroom recording studio, which he calls "The Sonic Promiseland".

His closest brush with mainstream success came in 2002, when the hip hop group The Roots remade a song from his album, "The Seed", for their album Phrenology, as "The Seed (2.0)". Chesnutt plays guitar and sings vocals on the track, and appears in its music video, which received heavy airplay on MTV and BET. At the height of his popularity, Chesnutt's backing band consisted of drummer Craig Waters, now with the band The Bellrays, and bassist Aaron Ebensperger. In October 2003, Cody Chesnutt was nominated for the prestigious Shortlist Music Prize, and performed in the ceremony for the prize at the Wiltern Theatre in California.

In 2006, Chesnutt appeared in the music documentary Dave Chappelle's Block Party, which was originally recorded in September 2004. The same year, he recorded the track "Boils" for the 4AD records album Plague Songs. On his Myspace announced an upcoming album titled The Live Release, which he has been performing around the world but is yet to be released. In 2007, he performed at the Pop Montreal music festival as one of the headliners.

In 2010 he released an EP called Black Skin No Value.[2] Furthermore he stated in an interview that he will publish his second big album Landing On A Hundred in 2012.[3]

In 2012, Cody performed live on Season 41 episode 06 of the BBC's show "Later... with Jools Holland". The three songs performed were "Til I Met Thee", "Under the Spell of the Handout" and "That's Still Mama".

This article uses material from the article Cody Chesnutt from the free encyclopedia Wikipedia and it is licensed under the GNU Free Documentation License.