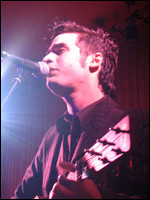 Aviv Geffen (Hebrew: אביב גפן‎, born May 10, 1973) is an Israeli rock musician, singer, songwriter, producer, keyboardist, and guitarist and the son of writer and poet Yehonatan Geffen and Nurit Makover, brother of actress Shira Geffen, and an alumnus of Rimon School of Jazz and Contemporary Music. In addition to his solo career, Geffen is a founding member of the band Blackfield.

Geffen was and is extremely popular among Israeli youth who were known during the 1990s as the "Moonlight Children" (ילדי אור הירח). Politically, he associates with the Israeli left. His music deals with subjects such as love, peace, death, suicide, politics, and the army (in particular, the IDF). He is often criticized for singing about the IDF while not having served, though he was discharged for medical reasons.[1]

Geffen was born and raised in Ramat Gan. His first public performance was in 1984, in the Israeli youth program "Shminiyot BaAvir" ["somersaults"] on the Israeli Channel 1, in which he sang the song "You're Only 40 Years Old" which his sister wrote and which he composed by himself. In 1987 Geffen participated in the amateur film "Hamitpahat" (The Handkerchief), for which he wrote and sang the song "Ima" ["Mom"].

In 1990, Geffen recorded his first song, "Friend" ["chaver"], together with the band "Cats in the Piping". In 1992, he released his first album, "Ze Rak Or Hayareach" [It's Only the Moonlight], all of whose tracks were written and the music composed by Geffen himself.

Also in 1992, he played a part in the teenage television series A Matter of Time. That year, he also wrote a song for the Israeli movie The Beach Boys. Geffen performed in clubs with his band HaTauyót ["The Mistakes"] (the Hebrew name is purposefully misspelled in two places).

In 1993, Geffen released his second album, Achshav Me'unan [It's Cloudy Now], which went gold in the same year and expressed his generation's dissatisfaction with the Israeli government. It was produced by Moshe Levi and Ofer Meiri, who created the typical Geffen sound. The title track "It's Cloudy Now" was followed by the question that many Israeli teenagers asked with Geffen – "Do you want change?"

In 1994, Geffen released his third album, Aviv Geffen III, a concept album about negative effects on someone who was forced to join the army, the album did not mark a change in Geffen's sound. The production was handled by Geffen and Lior Tevet. The album featured the major hit Ha'im Lehiot Bach Mehohav? ["Should I Be In Love With You?"], which was promoted by a video and followed the success of Achshav Me'unan.

In his next album, Shumakom [Nowhere"], Geffen took charge of the production, albeit with help from Reuven Shapira (as sound engineer), and producer Moshe Levi. Geffen again wrote all the lyrics and music.

As a political activist, Geffen also expressed the hope for peace with Israel's neighbors.

On November 4, 1995, the Israeli peace political parties organized a rally to support the peace process. Geffen was invited to perform, and surprisingly decided to perform Livkot Lekha ["Cry for You"], which he wrote and gave to Israeli singer Arik Einstein. Only later was it discovered that the lyrics prophesied the tragic assassination of Prime Minister Yitzhak Rabin later that night.[2] "Cry for You" became a kind of anthem, and was the song that symbolized the Candle Children who mourned Rabin's death visually with memorial candles.

In 1996, Geffen released HaMikhtav [The Letter]. Mèred HaDmaót [The Tears Rebellion] was written after Rabin's murder in 1995. It expressed a change and a turning point in Geffen's music. Later, in 1996, Geffen recorded what was known later as "The Israeli version of 'Imagine'", Shir Tikvá ["Let's Walk for the Dream"], which expressed deeply Geffen's vision.

In 1997, Geffen released his first compilation, which included a CD with the best songs of the early era, and a second CD which included B sides and live performances. An attempt to widen his audience on a global level saw one of Geffen's more unusual albums, Halulìm ["Hollowed"]. Like his "big brothers", it was also produced by Moshe Levi, but unlike them, it is a hard, cold, and alienated, full of distortion. Despite heavy promotion (such as billboards), it failed commercially.

1999 saw the release of Geffen's 8th studio album – Leilót Levanìm ["White Nights"], created under the influence of the changes in Geffen's life. Moshe Levi was again the producer; the combination of the two created a soft and melodic album compared to Halulim. It contained the song "Mexico" which stayed on the Israeli charts for a long time.

In September 2000, Geffen released his 9th album, Yomán Masá ["Journey"], for the first time produced by Louie Lahav, and on a new label – "Helicon". Geffen collaborated with two notable colleagues – Daniel Salomon (who joined from the Leilot Levanim tour) and Moshe Levi, who was involved in the orchestration. Geffen had recorded 11 melodic songs, with a bonus track – a tribute to Bob Dylan – an Israeli cover of Geshem Kaved Omed Lipol ["A Hard Rain's Gonna Fall"]m (translated by his father). The album produced three notable hits for Geffen: Uri Ur ["Wake Up"], Tsalakót ["Scars"], and Yoman Masa (together with Arik Einstein).

In 2001 Geffen met and began to collaborate with British rock star Steven Wilson, with whom he created the band Blackfield. Blackfield combines the musical efforts of both musicians and they perform their own original compositions as well as Aviv's own songs translated into English. The band released three highly acclaimed albums in the mid-2000s (see ahead) and conducted major tours for each release. Their fourth release in 2013 saw Wilson take more of a back seat due to his own increasing workload, opting to produce the album and contribute minor writing and recording work only.

Two years after "Journey" (April 2002), Geffen released his next album: "Memento Mori", which he dedicated to his grandmother, who died a short time before the album's release. The name was taken from the Latin phrase, "Remember You Will Die" (meaning one should remember one's mortality). Like his previous albums, "Memento Mori" was soft (but still features harder compositions). The album featured two major hits: Keren Or ["Ray of Light"] and Holèch Kadima ["Moving Forward"]. From this album came the single Shir Atzuv [Sad Song"].

In 2003 the Israeli documentary film "Aviv" was released which focused on Aviv Geffen's life. The film premiered at the Bangkok International Film Festival.

In 2004 the album "Blackfield" was released which was a result of the collaboration between Geffen & Steven Wilson of Porcupine Tree.[3][4] Its followup Blackfield II was released in early 2007,[5] followed by the live DVD Blackfield: Live in NYC later in the year. Both of the Blackfield albums spawned several hits, notably "Blackfield", "Pain" and "Once". A third album, entitled "Welcome to my DNA" was released in March 2011, in which most songs were written by Geffen. It also contains a renewed version of the track Zigota (זיגוטה) from his album "Memento Mori".

In 2006 Geffen's 11th album Im HaZmán ["With Time"] was released. The theme song is a cover of a French chanson by Léo Ferré, which indicated matureness and sobering from the clichés that he symbolized in his initial years. Most recently he compiled a 2CD/1DVD live album, simply titled Live. Lately, Geffen declared himself radical left.[6]

After releasing two albums with Blackfield, Geffen announced in November 2007 that he was recording his first English-language studio album.[7] In January 2008 his single 'End of the World' charted at number one in Poland and he performed at Bush Hall in London on the 31st. He released a single (Silence) at the end of 2008 and is touring throughout January 2009, with dates in Kraków, Berlin, Hamburg, Cologne, Amsterdam, Munich, Paris and London.

In June, he announced that recording had begun at Sarm West Studios, with Trevor Horn producing and Steven Wilson and Mike Garson featuring on the album. These sessions led to his debut English-language album, Aviv Geffen, released towards the end of summer 2009. The debut single released was 'It was Meant to be a Love Song'.

In March 2011, Blackfield's third studio album was released called "Welcome to my DNA".[8] 2013 saw the release of "Blackfield IV" with contributions of several guest vocalists.

Beginning in 2012, Aviv Geffen served as one of the four coaches on the Israeli version of the vocal performance competition show The Voice Israel.

Geffen spent most of 2015 recording Blackfield 5, still with involvement of Steve Wilson who obviously took over some guitar and vocal duties, although he had announced in 2014 that he had to stop from being part of Blackfield due to lack of time. The new album was recorded in London and Los Angeles, produced by the legendary Alan Parsons. According to Geffen's Twitter account the album (or just parts of the album) was finally mixed. The record is expected to be released in late 2016.

Aviv Geffen’s latest solo EP – Mr Down & Mrs High was released in the UK on May 23, 2012. Part produced by Tony Visconti and Trevor Horn, the EP features four tracks, includes the lead song Mr Down & Mrs High, with 'Jerusalem', "Highway' and 'When Summer Comes'.

Over the years, Geffen's musical style has been influenced by rock bands like Pink Floyd, U2, Radiohead, Nirvana, and artists like John Lennon and Bob Dylan. Geffen's piano and guitar playing is mainly influenced by Radiohead's Thom Yorke and U2's The Edge. Geffen has often cited Bob Dylan and Roger Waters as major influences.

Singles not included in albums

Geffen is the son of producer Nurit Geffen and author and poet Yehonatan Geffen. His sister is actress Shira Geffen. Geffen was named after his deceased grandmother, Aviva Geffen.

In 2005 Geffen married Shani Friedan after a seven-year relationship. The couple's first son, Dylan, was born in 2007. He is named after singer Bob Dylan.[9]

This article uses material from the article Aviv Geffen from the free encyclopedia Wikipedia and it is licensed under the GNU Free Documentation License.

Frédéric Chopin Andante spianato und Grande Polonaise brillante op. 22
Update Required To play the media you will need to either update your browser to a recent version or update your Flash plugin.