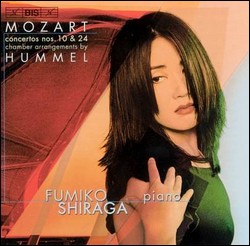 Fumiko Shiraga (白神 典子, Shiraga Fumiko, July 5, 1967 – January 13, 2017)[1] was a German–Japanese pianist, a revelation in her country in the late 1990s, well known in classical music both through CD recordings and public performances, in particular of piano concertos in disguise, transcriptions of known masterpieces for chamber ensemble.

She began studying piano in her native Tokyo before she was four years old, and when she was six her family moved to Germany. She studied in Essen, Detmold and Hannover. Even though born Japanese and though the Japanese culture is very well known to her, she describes herself as European and considers Germany as her homeland.

Fumiko Shiraga has performed as a solo artist and with orchestras, as well as with chamber music ensembles. She has been instrumental in the revival of the transcriptions (for flute, violin, violoncello and piano), by Johann Nepomuk Hummel, of some of the Mozart piano concertos. She recorded the two Piano Concertos by Chopin in a piano and string quintet transcription (1997) and then, in 2001 and in a similar arrangement, she recorded Beethoven's First and Second piano concertos, as well as piano music by Bruckner, including a piano arrangement of his seventh symphony.

The last twenty years she lived in Hamburg, where she died of breast cancer after a long fight against the disease in January 2017 just about four weeks after her last concert.

This article uses material from the article Fumiko Shiraga from the free encyclopedia Wikipedia and it is licensed under the GNU Free Documentation License.