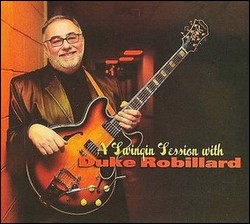 Michael John "Duke" Robillard (born October 4, 1948) is an American guitarist and singer. He founded the band Roomful of Blues and was a member of the Fabulous Thunderbirds. Although Robillard is known as a rock and blues guitarist, he also plays jazz and swing.

He played in bands as Mike "Honey Bear" Robillard and worked for the Guild Guitar Company. In 1967, he and Al Copley founded the band Roomful of Blues.[1][2]

He spent over ten years with Roomful of Blues before departing in 1979, becoming the guitarist for singer Robert Gordon and then a member of the Legendary Blues Band.[3] He started the Duke Robillard Band in 1981, eventually adopting the name Duke Robillard and the Pleasure Kings, with whom he toured throughout the 1980s and recorded for Rounder Records. He became a member of the Fabulous Thunderbirds in 1990 to replace Jimmie Vaughan.[2][3]

Although he was a member of bands, Robillard simultaneously pursued a solo career in which he toured and recorded solo albums in other genres, such as jazz and blues. He formed a duo with jazz guitarist Herb Ellis and the swing trio New Guitar Summit with Gerry Beaudoin and Jay Geils. He explored jump blues in A Swingin Session with Duke Robillard, returned to his rhythm and blues roots in Stomp! The Blues Tonight, and covered blues songs from the 1940s and '50s in Low Down and Tore Up. Briefly in 2013, he was the guitarist for Bob Dylan's tour.[3]

With Roomful of Blues

With The Fabulous Thunderbirds

This article uses material from the article Duke Robillard from the free encyclopedia Wikipedia and it is licensed under the GNU Free Documentation License.