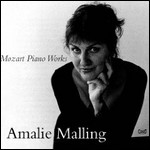 She studied under Herman David Koppel and then at the Hanover conservatoire and regularly worked with Alfred Brendel. She then moved to Denmark in 1961, where she won the first prize in the Scandinavian Piano Competition, then gave a series of recitals and concerts. Moving towards contemporary music, she performed several pieces dedicated to her by Danish composers. In 1981 she became a professor at the Royal Danish Academy of Music.

This article uses material from the article Amalie Malling from the free encyclopedia Wikipedia and it is licensed under the GNU Free Documentation License.

Juan Chrisóstomo de Arriaga Andante ma non troppo aus dem Streichquartett Nr. 2 A-Dur
Update Required To play the media you will need to either update your browser to a recent version or update your Flash plugin.