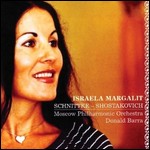 born in in Israel

She has appeared as soloist with many of the worlds greatest orchestras including The Berlin, London, and Israel Philharmonics, and the American Big Five of New York, Boston, Cleveland, Chicago, and Philadelphia. In addition she has given many piano recitals and performed in chamber music concerts. She toured extensively in the USA, Europe, Latin and South America, the Middle and the Far East. Shes recorded for Universal, Decca, EMI, Chandos, Koch Int., Telarc and Black Box, including her celebrated CDs of the Brahms, Rachmaninoff, Schumann, and Shostakovich Concertos with The London Symphony, The London Philharmonic, and the Moscow Philharmonic Orchestras, and her editors choice, 5-star reviewed chamber music CD series of Twentieth Century British and American Composers, in which she collaborated with the soloists of the London Symphony and the New York Philharmonic Orchestras. Her Korngold CD for EMI received the British Music Industry Award for Best CD. In 2014 she became Artistic Director of Moonlight Theatre Productions, dedicated to excellence and diversity.

She wrote television shows that have been shown in more than twenty countries, including a series with Sir Peter Ustinov, and specials for Germanys ZDF, ARD, Transtel/Deutsche Welle in association with PBS, and Arts & Entertainment. Her television shows got an EMMY Nomination, won the GOLD MEDAL at the NY Film & TV Festival, two NEA Media Awards, and the Long Island Film Festival Certificate of Merit (Finalist). She wrote a TV bible for a 100-episode series about Pushkin for Russia Channel 1/RWS, and served as story consultant to Columbia Tristar.

Her plays Night Blooming Jasmine, 3 Oclock in Brooklyn, and First Prize, were premiered in New York to audience and critical acclaim. Night Blooming Jasmine had an immensely successful second staging. Her play Trio was premiered in Moscow and became a six-year smash hit in the Russian capital as well as in St. Petersburg, Kiev and throughout Russia and the Ukraine. Trio has had an Ovation-recommended production in Los Angeles, and an award-winning production at the Pecks Theater Festival in Hungary. Her play On the Bench was named Outstanding Play, Honorary Mention, at The 14th Annual Short Play Festival, New York. Her one-act comedy Get me a Guy was first seen at the New York Midwinter Madness Festival, and later won Best Play and Best Direction, and got nominated for Outstanding Writing at the New York Midtown International Theater Awards.

She was the founding President of Music and More, a non-profit organization devoted to bringing classical music to inner city school children. Under her artistic directorship, Music and More presented a series of children concerts in The Harlem School of the Arts, a competition for minority talent, and a series of chamber music concerts in New York, London, Munich, and Frankfurt, in which she both performed on the piano, and anchored a talk with the audience. She is a member of the board of The Lark Theater Development Center, and of the International Board of Directors of the Jerusalem Academy of Music and Dance, and serves as Advisory Board for The Fire This Time festival of emerging black playwrights.

She is mother to Ilann Maazel, an award-winning civil rights lawyer and a pianist, and Fiona Maazel, and award-winning novelist and creative writing professor. She was born in Haifa, Israel, lives in New York, and speaks Hebrew, English, French, and German.

This article uses material from the article Israela Margalit from the free encyclopedia Wikipedia and it is licensed under the GNU Free Documentation License.