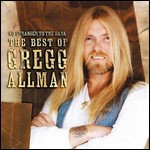 Gregory LeNoir "Gregg" Allman (born December 8, 1947) is an American rock and blues singer-songwriter, keyboardist, guitarist and a founding member of The Allman Brothers Band. He was inducted with the band into the Rock and Roll Hall of Fame in 1995. When Allman was inducted into the Georgia Music Hall of Fame on September 16, 2006 (he received a Lifetime Achievement Award) he was introduced by Georgia Governor Sonny Perdue and performed "Oncoming Traffic", "Melissa", and "Georgia on My Mind" solo and then ended with "Midnight Rider", backed by fellow inductees Bill Berry, Peter Buck, and Mike Mills from R.E.M. at the Georgia World Congress Center. His distinctive voice placed him in 70th place in the Rolling Stone list of the "100 Greatest Singers of All Time".[1]

At the beginning of the 1970s, The Allman Brothers Band (ABB) enjoyed huge success: their album Live at Filmore East is widely regarded as one of the best live albums ever made, and a number of their most characteristic songs were written by Gregg Allman. While it was unusual at the time, the band was based in the Southeastern United States. Southern Rock,' a term Gregg coined for their musical genre,[2] is a fusion of rock, blues, and country.

In spite of Duane Allman's death in 1971, and a year later, that of bass guitarist Berry Oakley, both in motorcycle accidents, the band continued to perform and record. In addition, Allman developed a solo career and a band under his own name. Allmans solo music has perhaps a greater resonance of soul music than his work with ABB, possibly because of the influence of artists such as Bobby Bland and Little Milton, singers who he has long admired.[cit?]

Despite recent health issues, Allman still tours. His latest album Low Country Blues is a return to the blues. It was released in 2011 and includes Just Another Rider written by Allman.

Gregg is the younger son of Willis Turner Allman and Geraldine Alice (née Robbins).[4] He was born in Nashville, Tennessee in 1947, thirteen months after his brother Duane. His father was in the army and in 1949 the family relocated to Fort Story, Norfolk, Virginia. Shortly after, his father was murdered by a casual acquaintance whom he had offered a ride home from a bar [5] and Geraldine 'Mama A' Allman was left to raise the boys. In order to retrain as an accountant, she sent her sons to Castle Heights Military Academy in Lebanon, Tennessee, which they both loathed.[6] Eventually, in 1957, when his mother had finished her degree, the family settled in Daytona Beach, Florida, and the boys attended Seabreeze High School.

Both Gregg Allman and his brother Duane became captivated by music at a young age; Gregg Allman has revealed that he and Duane went to see Jackie Wilson, Otis Redding, Patti Labelle and B.B. King perform and that he was particularly struck by B.B.s Hammond organ player.[7] Gregg took an interest in the guitar before Duane did, learning the very basics from his grandmothers neighbour in Nashville. However Duane would soon become the superior guitarist, giving up school in tenth grade to focus on it while Gregg practiced his vocals and keyboards, remained at school and finally graduated in 1965. Although he planned to become a dental surgeon, Gregg fell in with his brothers plans that they should become musicians, intending to go to dental school after a short while; it didnt happen.[8]

The Escorts, The Allman Joys, The Hour Glass and 31st February

In the mid-to-late-1960s, Gregg and Duane Allman played in a series of bands including The Escorts and The Allman Joys, mostly around the Southeastern United States. According to a 2013 interview in American Blues Scene Magazine, the first band the brothers played in was The House Rockers and The Untils in Daytona Beach, Florida.[9]

Toward the end of the decade, The Allman Joys relocated to Los Angeles, California, and were signed to Liberty Records, which renamed them The Hour Glass. In addition to the Allmans, The Hour Glass consisted of three other players who would later become renowned studio musicians in Muscle Shoals, Alabama: Pete Carr, Johnny Sandlin and Paul Hornsby. Strongly controlled by the label management, the group produced a couple of psychedelic blues albums. All the players were deeply dissatisfied with the results; Duane Allman, in particular, spoke bitterly of the Hour Glass' output. The label executives were, however, impressed with Gregg Allman's abilities as a vocalist and keyboardist. The band left Los Angeles for the South and disbanded. In Florida, Gregg and Duane joined a band called 31 February with a drummer named Butch Trucks but Gregg returned to California as Hourglass still owed money to Liberty Records which believed that Gregg had potential as a solo act.[10]

Formation of The Allman Brothers Band

Duane became employed as a session musician at FAME Studios in Muscle Shoals, Alabama and began to assemble the group that would become The Allman Brothers Band - Duane and Dickey Betts on guitars, Berry Oakley on bass guitar, and Butch Trucks and Jai Johanny "Jaimoe" Johanson on drums. In the meantime, Allman had grown unhappy with the Liberty Records arrangement so when Duane called from Jacksonville, Florida in March 1969 to say that he had assembled a band that needed a singer, Gregg jumped at the opportunity and returned to the South.

He had long wanted to play the Hammond Organ, and was given one immediately upon joining the band, which he had to learn to play in a hurry. Ever since, he has played the Hammond B-3 with a preference for a 1969-issue B3 hooked to a Leslie speaker 122RV and handled much of the lead vocals and songwriting for the band, along with occasional piano and guitar contributions.

After the death of Duane Allman in 1971, Gregg Allman started out on a solo career. His first album, Laid Back, was released in 1973 to a positive critical reception.

It included a couple of reworked Allman Brothers songs, such as a horn-infused version of "Midnight Rider" that made it to #19 on the Billboard Hot 100 singles chart, and originals like "Queen of Hearts", that the other ABB members felt did not quite fit the Allman Brothers sound. Gregg also covered a traditional gospel song "Will the Circle Be Unbroken?" and former California roommate Jackson Browne's song "These Days."

His solo career has continued intermittently throughout the subsequent decades, sometimes touring when the Allman Brothers Band was off the road. Generally, these solo efforts - first with the Gregg Allman Band, and later with Gregg Allman & Friends - eschew lengthy guitar solos and cast Allman more in the mode of his favorite soul singers. The bands often include a horn section and are more groove-oriented, mixing original songs with reworked Allman Brothers songs and covers of blues, R&B, and soul songs.

Allman's second chart single came in 1987 with the #49 peaking "I'm No Angel", from the album of the same name. The album went on to be certified Gold for 500,000 copies sold and led to a renewed interest in Allman and to a reformation of the Allman Brothers Band less than three years later.

His solo album, Low Country Blues, was produced by T-Bone Burnett and issued in early 2011. It is a collection of eleven blues standards and one new song written by him.[11] The album was nominated as the Best Blues Album for the 2011 Grammy Awards.[12]

He has also made guest appearances on albums and concert videos by a wide variety of other artists, including a concert DVD celebrating the twenty-fifth anniversary of The Radiators, playing Midnight Rider with that band.

In addition to his musical career, Allman took acting roles in the films Rush Week (1989) and Rush (1991), and in episodes of the TV series Superboy. He also had a brief speaking cameo in the Family Guy episode "Let's Go to the Hop".

Allman struggled with drugs in the 1970s, and throughout much of his musical career. These were both illegal and legal, primarily cocaine, heroin, and alcohol. He's been sober since the mid-1990s.

During the mid-1970s, there was a prominent and high-profile court case involving Allman and John C. "Scooter" Herring, Allmans road manager, and the use of drugs. After Herring was indicted, Allman agreed to testify at Herring's trial in exchange for a grant of immunity from prosecution.[13][14]

He was diagnosed with Hepatitis C in late 2007 which he attributes to infection from a dirty tattoo needle [15] and on June 23, 2010, he underwent surgery for a liver transplant.[16] The operation was successful and he has recovered well. Allman, along with Natalie Cole has become a spokesperson for Tune In to Hep C which includes a PSA TV commercial. Despite this blow to his health, Allman has resumed touring.

Gregg Allman's autobiography My Cross to Bear was published by HarperCollins under the William Morrow imprint in 2012. Craig Gillespie has announced that he will adapt it into a film.

Allman has been married six times, and has five children.

This article uses material from the article Gregg Allman from the free encyclopedia Wikipedia and it is licensed under the GNU Free Documentation License.