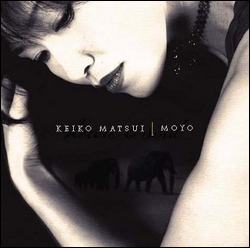 Keiko Matsui (, Keiko Matsui?), born in Tokyo, Japan as Keiko Doi, is a Japanese keyboardist and composer, specializing in smooth jazz, jazz fusion and new age music. Her career spans three decades, during which time she has released twenty CDs (in addition to various compilations) and has received international acclaim. She resides in Los Angeles, California.

Keiko Doi's mother Emiko, took her to her first piano lesson in the June following her fifth birthday. Japanese tradition holds that a child who is introduced to lessons at this time will continue in those studies for a long time. The tradition held true for Doi, who studied piano throughout her school years. Though her early training focused on classical music, in junior high school she developed an interest in jazz and began composing her own music. Some of her musical influences at the time included Stevie Wonder, Sergei Rachmaninoff, Maurice Jarre and Chick Corea.

Doi studied children's culture at Japan Women's University (, nihon joshidaigaku?), but also continued to study music at the Yamaha Music Foundation. Doi was a top student in the Yamaha Music Education System and was selected at the age of seventeen to be a recording artist for them. Thus she joined the Japanese jazz fusion group Cosmos, which recorded seven albums.

At age 19, Yamaha sent Doi to America to record an album, and there she met Kazu Matsui, who had been selected as a producer for the project. In 1987, Matsui recorded her solo debut LP A Drop of Water, The album's title, the name of a song by Carl Anderson, was in memory of those who died in the Space Shuttle Challenger disaster the year before. Its success led to a record deal with MCA Records.

Matsui received the Oasis award for Best Female Smooth Jazz Artist of the Year in 1999 and again in 2000. In 2001, Matsui's first album with Narada, Deep Blue, finally took her to the number one spot on Billboard's Top Contemporary Jazz Albums chart and held the position for three weeks.

When United States President George W. Bush visited Japanese Prime Minister Junichiro Koizumi's residence on February 18, 2002, Keiko Matsui was invited to the reception and met both men and members of their administrations.

Matsui discovered saxophonist Paul Taylor, who appeared on Sapphire, Dream Walk, and Full Moon and the Shrine before going on to a successful career of his own [1].

Matsui has taken an interest in a variety of charitable causes. Her 1997 mini-CD A Gift of Hope went to support the Y-ME National Breast Cancer Organization, and her music appeared in a Lifetime channel special about breast cancer, "Say It, Fight It, Cure It." Matsui also played at a special ice skating benefit in 1997 to support the Susan G. Komen for the Cure.

Proceeds from Matsui's 2001 mini-CD A Gift of Life went to the National Marrow Donor Program and the Marrow Foundation in support of their program Asians for Miracle Marrow Matches, which promotes the registration of people of ethnic minorities as marrow donors in hopes of improving the chance of finding matching donors for people of similar descent, in need.

Royalties from the title track of Matsui's 2004 CD Wildflower went to support of the United Nations World Food Programme (WFP). Matsui played at the United Nations Headquarters building in New York City on December 17, 2003, to benefit the WFP and fight world hunger.

Matsui's music is powerful and introspective, blending both Western and Eastern musical influences. She has a very spiritual view of composing music, feeling out each composition as though it were, in her words, "coming to me from another space, another dimension," and "catching notes from the silence and then simply placing them together" [2]. Matsui sees music as "the great gifts from the human souls from the past, for the children of the future" [3]. She believes that music has a power to bring people together and change their lives. "We are connected by music," Matsui wrote, "as the Ocean connects the continents" [4].

A lover of nature, Matsui often makes reference to plants, animals, the elements, and other natural features and phenomena in her song titles. She shows a special fascination with the moon as a number of her compositions refer to the moon in their titles.

Matsui's music shows signs of evolving over the years. Her American debut album A Drop of Water showed a promise of east meets west with a jazz fusion flavor. However, her recordings for MCA Records in the early 1990s lacked this appeal and, for many, sounded indistinguishable from the rest of what is now known as smooth jazz. Starting with Cherry Blossom, though, her music increased in popularity as she differentiated herself from the rest of contemporary jazz. By the time Sapphire was released in 1995, her music flirted with everything from funk music to Latin and world music.

Whisper From the Mirror from 2000 showed Matsui leaving the smooth jazz style and moving towards new age with a soundscape sound. A number of her fans had a problem adapting to her new style of music (though she continued to play smooth jazz at her concerts). But many welcomed the change. Over time her post-2000 albums show a more worldbeat flavor to them. Her 2005 release Walls of Akendora, however, is a return to her pre-2000, smooth jazz days.

This CD includes one of Matsui's best-known pieces, "Forever, Forever."

Several of these albums have been later re-released under different record labels.

This article uses material from the article Keiko Matsui from the free encyclopedia Wikipedia and it is licensed under the GNU Free Documentation License.