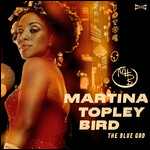 Martina Topley-Bird (born 7 May 1975) is an English vocalist and songwriter who first gained fame as the featured female vocalist on trip hop pioneer Tricky's debut album, Maxinquaye. She worked with him on his follow-up albums and, in 2003, released her own solo album, Quixotic.

Martina Topley-Bird is the daughter of well-known British direct marketing specialist, Drayton Bird, and her mother is Salvadoran, Seminole Indian and African American.[1] Her first contact with public persona was as a choir singer at Clifton College.[2] It was while she was a teenager at the school that she met trip hop pioneer Tricky, with whom she worked on his first album Maxinquaye[3] (a printing error credited her as "Martine"). She continued her collaboration with Tricky on his follow-up albums Nearly God, Pre-Millennium Tension and Angels with Dirty Faces. Topley-Bird and Tricky have one child together, a daughter, born around the release of Maxinquaye.

Following a falling-out of their professional and personal relationship in 1998, she began pursuing a solo career. It was not until 2003 that she released her debut album, Quixotic (Independiente Records), mainly produced by Topley-Bird and production team AMP9 (Alex McGowan, Steve Crittall, Nick Bird) at Space Eko Recording Studios London. Upon its release, it received positive reviews from critics and was a finalist for the 2003 Mercury Music Prize.

The album finally saw a limited release in the United States in July 2004 when the Palm Pictures label released a re-designed and re-sequenced version with a new title (Anything), a trimmed-down tracklisting and all-new cover art.

The following year she appeared on the Starbucks compilation album, Sweetheart 2005: Love Songs, which features contemporary musicians covering classic love songs. She sang "I Only Have Eyes for You", a song originally by composer Harry Warren and lyricist Al Dubin.

In 2010, Topley-Bird appeared on the album Heligoland by Massive Attack, lending her voice on the tracks "Psyche" and "Babel". She also toured with Massive Attack as their support act and providing guest vocals. Topley-Bird's third album, Some Place Simple, was released in July 2010. It contained stripped-down versions of songs from her first two releases, along with four new songs.

Also in 2012, she appeared on the track "Secret" on IDM musician Clark's album Iradelphic.

This article uses material from the article Martina Topley-Bird from the free encyclopedia Wikipedia and it is licensed under the GNU Free Documentation License.