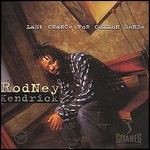 Rodney Kendrick (born April 30, 1960) is an American jazz pianist, bandleader, composer, and producer. He has been described as a "hard swinging player and composer with a delightful Monkish wit and drive."[1]

Rodney Kendrick was born in Philadelphia, Pennsylvania. He grew up in Miami, Florida, where his parents moved soon after his birth. Kendrick grew up in a musical, and Pentecostal church-going family. His father is James Jimmy Kay Kendrick, a pianist who worked with saxophonist Illinois Jacquet for seven years, played with saxophonist Sonny Stitt and Sam Rivers. His mother is a gospel singer named Juet.

When Kendrick was eighteen, he turned professional, touring and playing keyboards with R&B and funk acts. He traveled internationally with Harold Melvin & The Blue Notes, James Brown and George Clinton.

At twenty-one, Kendrick began a primary focus on jazz, moving to New York in 1981. He played keyboards for artists such as Freddie Hubbard, Terence Blanchard, Stanley Turrentine, Clark Terry, J. J. Johnson, and others. He studied with pianist Barry Harris, who remained his teacher and mentor for over 20 years. Kendrick cites Randy Weston and Sun Ra as influences.[2] In the early 1990s he served as Abbey Lincolns musical leader for seven years.

In 1994, Kendrick signed a contract with Verve Records, who issued his debut, The Secrets of Rodney Kendrick, and a year later the follow-up, Dance World Dance (1995), recording showcases Kendrick's arranging skills as well as his compositions. Both these albums features a range of musicians, from the smooth soul jazz saxophonist Houston Person to post-bop cornetist Graham Haynes, and alto-saxophonist Arthur Blythe, and South African tenorist Bheki Mseleku among its guests.

His next album We Don't Die, We Multiply (1997), composed primarily of Kendrick's compositions. One composition, "Led Astray", is by his wife Rhonda. On several tracks, Dewey Redman played saxophone.

Rodney has produced several albums, including a solo piece titled Thank You (2002), a duo-piano piece with his mentor Randy Weston, an album with his wife titled Rhonda Ross Live: Featuring Rodney Kendrick (2002), as well as a project with his father, Jimmy Kay, entitled Black is Back (2006).

Kendrick has been married to Rhonda Ross Kendrick since September 13, 1996. On August 7, 2009, their son Raif-Henok Emmanuel Kendrick was born.[3]

This article uses material from the article Rodney Kendrick from the free encyclopedia Wikipedia and it is licensed under the GNU Free Documentation License.