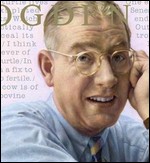 Frederic Ogden Nash (August 19, 1902 – May 19, 1971) was an American poet well known for his light verse, of which he wrote over 500 pieces. With his unconventional rhyming schemes, he was declared the country's best-known producer of humorous poetry.

Nash was born in Rye, New York, the son of Mattie (Chenault) and Edmund Strudwick Nash.[1][2] His father owned and operated an import-export company, and because of business obligations, the family relocated often. Nash was descended from Abner Nash, an early governor of North Carolina. The city of Nashville, Tennessee, was named for Abner's brother, Francis, a Revolutionary War general.[3][4]

Throughout his life, Nash loved to rhyme. "I think in terms of rhyme, and have since I was six years old," he stated in a 1958 news interview.[5] He had a fondness for crafting his own words whenever rhyming words did not exist, though admitting that crafting rhymes was not always the easiest task.[5]

His family lived briefly in Savannah, Georgia, in a carriage house owned by Juliette Gordon Low, founder of the Girl Scouts of the USA; he wrote a poem about Mrs. Low's House. After graduating from St. George's School in Newport County, Rhode Island, Nash entered Harvard University in 1920, only to drop out a year later.

He returned as a teacher to St. George's for one year before returning to New York.[6] There, he took up selling bonds, about which Nash reportedly quipped, "Came to New York to make my fortune as a bond salesman and in two years sold one bond—to my godmother. However, I saw lots of good movies."[6] Nash then took a position as a writer of the streetcar card ads for Barron Collier,[6] a company that previously had employed another Baltimore resident, F. Scott Fitzgerald. He spent three months in 1931 working on the editorial staff for The New Yorker.[6][7]

In 1931 he married Frances Leonard.[8] He published his first collection of poems, Hard Lines, that same year, earning him national recognition.[9] Some of his poems reflected an anti-establishment feeling. For example, one verse, titled Common Sense, asks:

Why did the Lord give us agility,
If not to evade responsibility?

In 1934, Nash moved to Baltimore, Maryland, where he remained until his death in 1971. Nash thought of Baltimore as home. After his return from a brief move to New York, he wrote, apropos Richard Lovelace, "I could have loved New York had I not loved Balti-more."

When Nash wasn't writing poems, he made guest appearances on comedy and radio shows and toured the United States and the United Kingdom, giving lectures at colleges and universities.

Nash was regarded with respect by the literary establishment, and his poems were frequently anthologized even in serious collections such as Selden Rodman's 1946 A New Anthology of Modern Poetry.

Nash was the lyricist for the Broadway musical One Touch of Venus, collaborating with librettist S. J. Perelman and composer Kurt Weill. The show included the notable song "Speak Low." He also wrote the lyrics for the 1952 revue Two's Company.

Nash and his love of the Baltimore Colts were featured in the December 13, 1968 issue of Life,[10] with several poems about the American football team matched to full-page pictures. Entitled "My Colts, verses and reverses," the issue includes his poems and photographs by Arthur Rickerby. "Mr. Nash, the league leading writer of light verse (Averaging better than 6.3 lines per carry), lives in Baltimore and loves the Colts," it declares. The comments further describe Nash as "a fanatic of the Baltimore Colts, and a gentleman." Featured on the magazine cover is defensive player Dennis Gaubatz, number 53, in midair pursuit with this description: "That is he, looming 10 feet tall or taller above the Steelers' signal caller...Since Gaubatz acts like this on Sunday, I'll do my quarterbacking Monday." Memorable Colts Jimmy Orr, Billy Ray Smith, Bubba Smith, Willie Richardson, Dick Szymanski and Lou Michaels contribute to the poetry.

Among his most popular writings were a series of animal verses, many of which featured his off-kilter rhyming devices. Examples include "If called by a panther / Don't anther"; "Who wants my jellyfish? / I'm not sellyfish!"; "The one-L lama, he's a priest. The two-L llama, he's a beast. And I will bet a silk pajama: there isn't any three-L lllama!". Nash later appended the footnote " *The author's attention has been called to a type of conflagration known as a three-alarmer. Pooh."[11]

Nash died at Baltimore's Johns Hopkins Hospital on May 19, 1971, of complications from Crohn's disease aggravated by a lactobacillus infection transmitted by improperly prepared coleslaw.[12] He is buried in East Side Cemetery in North Hampton, New Hampshire.[13]

At the time of his death in 1971, The New York Times said his "droll verse with its unconventional rhymes made him the country's best-known producer of humorous poetry."[12]

A biography, Ogden Nash: the Life and Work of America's Laureate of Light Verse, was written by Douglas M. Parker, published in 2005 and in paperback in 2007. The book was written with the cooperation of the Nash family, and quotes extensively from Nash's personal correspondence as well as his poetry.

His daughter Isabel was married to noted photographer Fred Eberstadt, and his granddaughter, Fernanda Eberstadt, is an acclaimed author. Nash had one other daughter, Linell Nash Smith.

A girl who's bespectacled
May not get her nectacled

In this example, the word "nectacled" sounds like the phrase "neck tickled" when rhymed with the previous line.

Sometimes the words rhyme by mispronunciation rather than misspelling, as in:

Another typical example of rhyming by combining words occurs in "The Adventures of Isabel", when Isabel confronts a witch who threatens to turn her into a toad:

Nash often wrote in an exaggerated verse form with pairs of lines that rhyme, but are of dissimilar length and irregular meter:

Once there was a man named Mr. Palliser and he asked his wife, May I be a gourmet?
And she said, You sure may.

Nash's poetry was often a playful twist of an old saying or poem. For one example, he expressed this playfulness in what is perhaps his most famous rhyme, a twist on Joyce Kilmer's poem "Trees" (1913): "I think that I shall never see / a poem lovely as a tree," which drops "billboard" in place of poem and adds, "Indeed, unless the billboards fall / I'll never see a tree at all."[14] That same playfulness produced a number of often quoted quips, including "Progress might have been all right once, but it has gone on too long" and "People who work sitting down get paid more than people who work standing up."

Nash, a baseball fan, wrote a poem titled "Line-Up for Yesterday," an alphabetical poem listing baseball immortals.[15] Published in Sport magazine in January 1949, the poem pays tribute to the baseball greats and to his own fandom, in alphabetical order. Here is a sampling from his A to Z list:[16]

C is for Cobb, Who grew spikes and not corn, And made all the basemen Wish they weren't born.
D is for Dean, The grammatical Diz, When they asked, Who's the tops? Said correctly, I is.
E is for Evers, His jaw in advance; Never afraid To Tinker with Chance.
F is for Fordham And Frankie and Frisch; I wish he were back With the Giants, I wish.

Nash wrote humorous poems for each movement of the Camille Saint-Saëns orchestral suite The Carnival of the Animals, which are sometimes recited when the work is performed. The original recording of this version was made by Columbia Records in the 1940s, with Noël Coward reciting the poems and Andre Kostelanetz conducting the orchestra.

He wrote a humorous poem about the IRS and income tax titled Song for the Saddest Ides, a reference to March 15, the ides of March, when federal taxes were due at the time. It was later set to music and performed by the IRS Chorale until its composer/conductor's later retirement.

Many of his poems, reflecting the times in which they were written, presented stereotypes of different nationalities. For example, in Genealogical Reflections he writes:

No McTavish
Was ever Lavish

In The Japanese published in 1938, Nash presents an allegory for the expansionist policies of the Empire of Japan:

How courteous is the Japanese;
He always says, "Excuse it, please."
He climbs into his neighbor’s garden,
And smiles, and says, "I beg your pardon";
He bows and grins a friendly grin,
And calls his hungry family in;
He grins, and bows a friendly bow;
"So sorry, this my garden now."

He published some poems for children, including "The Adventures of Isabel", which begins:

The US Postal Service released a postage stamp featuring Ogden Nash and text from six of his poems on the centennial of his birth on 19 August 2002. The six poems are "The Turtle", "The Cow", "Crossing The Border", "The Kitten", "The Camel", and "Limerick One". It was the first stamp in the history of the USPS to include the word "sex", although as a synonym for gender.[9] It can be found under the "O" and is part of "The Turtle". The stamp is the eighteenth in the Literary Arts section.[18][19] The first issue ceremony took place in Baltimore on August 19 at the home that he and his wife Frances shared with his parents on 4300 Rugby Road, where he did most of his writing.

This article uses material from the article Ogden Nash from the free encyclopedia Wikipedia and it is licensed under the GNU Free Documentation License.