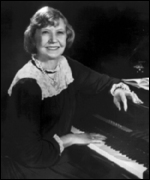 Norma Teagarden (1911 June 6, 1996) was a notable jazz pianist. She was born in Vernon, Texas, the sister of jazz trombonist Jack Teagarden and jazz musician Charlie Teagarden.

Norma Teagarden studied piano with her mother and became an outstanding pianist, with a worldwide reputation. She started working professionally in Oklahoma City around 1926, then moved to New Mexico in 1929 and worked in various territory bands. In 1935, she led her own band in Oklahoma City, then again in Long Beach, California in 1942.

In 1944, she joined brother Jack Teagarden's band and toured with him. After this, she moved back to California and worked with Ben Pollack, Matty Matlock, Ada Leonard, Ted Vesley, Pete Daily, and Ray Bauduc. She again joined Jack Teagarden in 1952.

This article uses material from the article Norma Teagarden from the free encyclopedia Wikipedia and it is licensed under the GNU Free Documentation License.

Antonio Vivaldi 2.Satz aus "Der Frühling" aus Die vier Jahreszeiten
Update Required To play the media you will need to either update your browser to a recent version or update your Flash plugin.