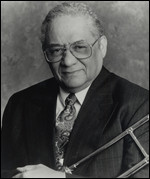 He was born in Alabama, but his parents moved to Pittsburgh, Pennsylvania when he was eight. It was in Pittsburgh that he became interested in jazz.

He began on trombone in his teens after initially desiring to learn trumpet. However, his arms were considered long, so the school trained him in trombone as they needed trombonists more than trumpeters. In adulthood he worked with the United States Marines band, Lionel Hampton, and Duke Ellington. He became best known for his association with Count Basie, which began in 1962. He was lead trombone for Basie by 1970, but after that he took time off. He founded his own band in 1978 which he continued to lead even after returning to Basie's Orchestra in 1980. From 1995 until his death, he served as director of the Count Basie Orchestra. In that capacity he won the Grammy Award for Best Large Jazz Ensemble Album twice.

Mitchell was inducted into the Alabama Jazz Hall of Fame in 2008.

This article uses material from the article Grover Mitchell from the free encyclopedia Wikipedia and it is licensed under the GNU Free Documentation License.

Antonín Dvorák Allegro giocoso ma non troppo aus dem Violinkonzert a-moll op. 53
Update Required To play the media you will need to either update your browser to a recent version or update your Flash plugin.