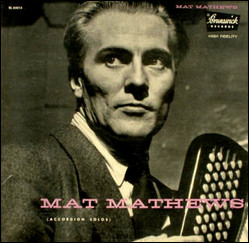 Mathews was born in The Hague and learned to play accordion while the Netherlands was under Nazi rule during World War II. Mat's first wife was from the Netherlands and they were married in 1947 and they had a son Peter. After hearing Joe Mooney on a radio broadcast after the war, he decided to begin playing jazz. From 1947 to 1950 he played with The Millers in the Netherlands, and then moved to New York City on March 1, 1951 with wife, Paulette Girard. They were married in Tripoli North Africa @ the consulate. They were there performing for the troops from 1950 - 1951. He moved into Paulette's mother's home @ 10 Ocean Parkway in Brooklyn NY and lived there with Paulette. Owl Eyes was their one of their co-writes which they gave to Jazzbo. He was a disc jockey who played Jazz late night. Mat performed on the Arthur Godfrey Hour and played at Carnegie Hall.[2]

He formed a quartet there which included Herbie Mann; he also played with Art Farmer, Julius Watkins, Joe Puma, Oscar Pettiford, Gigi Gryce, Dick Katz, Percy Heath, and Kenny Clarke. He played with Carmen McRae in 1954-55 who was signed to Coral records after Paulette bet Mat that she could get Carmen signed because she listened. In 1956 he played in the group The 4 Most with Al Cohn, Gene Quill, Hank Jones and Mundell Lowe and they recorded the track Ooh Baby It Scares Me by Paulette Girard. Paulette and Mat then divorced.

In 1957 Mat Recorded a several records in Toronto Canada where he met, Wilhelmina (Billie) Bailey. Billy was a beautiful runway model and also performed on several radio shows in Canada. Billy and Mat moved to New York and got married in 1958. They settled in Fairlawn, New Jersey and sortly thereafter they had twins, Karen and Bryan. In 1959, Mat and Billie had another child Jennifer. Mat continued playing, recording and traveling. However Mat found it very difficult to balance a career in Jazz with the demands of being father and husband. The music world was also changing quickly and Jazz was being eclipsed by the pop/rock music scene. Playing the accordion was also less mainstream in the North American Jazz scene which made it more challenging. Peter, Mat's first son moved to New Jersey to be with the family. However, in 1964, Mat and Billy had their fourth child, Melissa (Liesje) and they moved back to The Netherlands where he worked primarily as a studio musician arranger and producer. He and recorded less as a player but continued to perform local gigs in the Netherlands, Germany, Belgium and France. During the 1960s in the Netherlands Mat had commercial success which was necessary to help support his large family. Mat's parents, were from Den Hague and they also encouraged Mat to play the accordion from an early age.

In 1971, Mat and Billie decided to move back to the United States as Mat had several opportunities to record. They moved to Rochester NY where Mat played and recorded with Doug Duke, Charlie Byrd, Clark Terry, Marion McPartland in Doug Duke's Music room. http://www.walterdixon.com/dougdukelanding.html. After several challenging years, Billie and Mat split up and Billie moved back to Toronto and Mat went back to the Netherlands to be with his mother whose health was failing. During these years he played local gigs in Europe and spent the summers in Norway playing in Christiansand. In 1979 Mat and Billie moved to Atlanta, Georgia where Mat had a recording contract with Delta Airlines for in-flight music to Europe. He also played regularly at the Westin Peachtree plaza and in Hilton Head. Mat was always on the move and was happiest when traveling. Mat and Billie split and got together several times before Billie died in 1989. Billie built a very successful advertising agency in Toronto and Atlanta specializing in University Related publications. In 1993, Mat was living in Rotterdam. He recorded Meditation at that time in Los Angeles, California. www.cduniverse.com/productinfo.asp?pid=7058863Cached. This is a beautiful CD that really captures the very best of Mat's playing and is a great final tribute to his life's work. In the late 1990s Mat's health began to fail and he started to have cognitive issues related to dementia. Mat lived in a Nursing home in Rotterdam and was being cared for by his beloved granddaughter Tamar and her mother Jopie until he died in 2009.

This article uses material from the article Mat Mathews from the free encyclopedia Wikipedia and it is licensed under the GNU Free Documentation License.