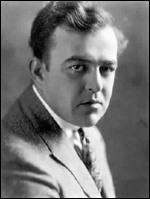 Victor L. Schertzinger (April 8, 1888[1] – October 26, 1941) was an American composer, film director, film producer, and screenwriter. His films include Paramount on Parade (co-director, 1930), Something to Sing About (1937) with James Cagney, and the first two "Road" pictures Road to Singapore (1940) and Road to Zanzibar (1941). His two best-known songs are "I Remember You" and "Tangerine", both with lyrics by Johnny Mercer and both featured in Schertzinger's final film, The Fleet's In (1942).

Schertzinger was born in Mahanoy City, Pennsylvania, the child of musical parents of Pennsylvania Dutch descent, and attracted attention as a violin prodigy at the age of four.[2] As a child of eight, he appeared as a violinist with several orchestras, including the Victor Herbert Orchestra and the John Philip Sousa band. In his teens, he attended the Brown Preparatory School in Philadelphia, and gave violin performances while touring America and Europe.[3]

Schertzinger studied music at the University of Brussels. He continued to distinguish himself as a concert violinist, and then as a symphony conductor. He also worked as a songwriter, adding three songs with lyrics by producer Oliver Morosco to L. Frank Baum and Louis F. Gottschalk's musical, The Tik-Tok Man of Oz (1914). His first brush with the film industry came in 1916, when Thomas Ince commissioned him to compose the orchestral accompaniment for his great silent film Civilization. Remaining under Ince's employment, Schertzinger became principal director of the popular Charles Ray films, establishing a rapport with the mercurial Ray that few of the star's other collaborators would ever achieve.[4]

After the introduction of sound, Schertzinger continued to direct films but also began to compose songs for them, and in some instances writing scripts or producing as well. Though closely associated with Paramount Pictures, Schertzinger actually spent the thirties as a freelancer. Some of his best films, such as One Night of Love (1934) and The Mikado (1939) exploited his vast knowledge of the world of music.

Schertzinger married Julia E. Nicklin, to whom he remained married until his death. They had two daughters, Patricia and Paula, in the early 1920s.[5]

Schertzinger died unexpectedly from a heart attack in Hollywood at the age of 53, having just finished work on The Fleet's In (1942). He had directed 89 films, and had composed music for more than 50 films. He was buried in Forest Lawn's Glendale location.[1]

The Hollywood Walk of Fame contains a star for Schertzinger at 1611 Vine Street.[6] In his home town of Mahanoy City, an official marker from the Pennsylvania Historical and Museum Commission indicates the location of the Schertzinger homestead and jewelry store where Schertzinger grew up. The marker reads:

Violin prodigy who performed with John Philip Sousa and later became a film director and composer. He pioneered the use of original film music for films, and his film 'One Night of Love' won best musical score and sound recording Oscars in 1934. He composed the pop standard 'Tangerine.' Among many films he directed were two of the Hope and Crosby 'Road' movies. He was awarded a star on the Hollywood Walk of Fame. His childhood home was here.[2]

Schertzinger's two best-known songs, "I Remember You" and "Tangerine", continue to appear in the soundtracks of new films.

Schertzinger also appears as a recurring character in the Epic Short Story The Organ of Love.[7]

The following information comes from the Internet Movie Database.[8] All listed films were directed by Schertzinger, unless otherwise noted.

Unless otherwise noted, the following information comes from the Internet Movie Database.[9]

This article uses material from the article Victor Schertzinger from the free encyclopedia Wikipedia and it is licensed under the GNU Free Documentation License.