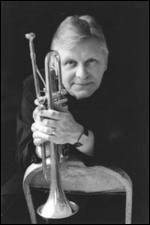 Palle Mikkelborg (born 6 March 1941) is a Danish jazz trumpeter, composer, arranger and record producer.[1][2] He started playing professionally in 1960, and has since been a dominant figure on the Danish and international progressive jazz scene. He has released several solo records, and recorded with various co-founded groups, as well as appearing as sideman or arranger on numerous international records. Notable international collaborations include appearances with the Gil Evans Big Band, the George Russell Big Band, Gary Peacock, Jan Garbarek, and Miles Davis, for whom he composed and produced the 1985 (released 1989) record Aura. In 2001 he was awarded the Nordic Council Music Prize.

This article uses material from the article Palle Mikkelborg from the free encyclopedia Wikipedia and it is licensed under the GNU Free Documentation License.