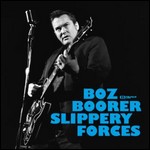 Boz Boorer (born Martin James Boorer, 19 May 1962 in Edgware, Middlesex) is a British guitarist and producer most known for his work founding the new wave rockabilly group, The Polecats, and later for his work as a co-writer, guitarist and musical director with Morrissey.

The band "Cult Heroes" was formed in 1977 by Tim Worman (a.k.a. Tim Polecat, vocalist), Boz Boorer (guitarist and vocalist), Phil Bloomberg (bassist), and Chris Hawkes (drummer). After finding much difficulty persuading promoters to book them on the rockabilly circuit with a name sounding "too punk", they adopted Hawkes' suggested band name The Polecats. Hawkes was later replaced by Neil Rooney. Three years after forming, the band signed to the fledgling British rockabilly record label Nervous Records, and released the single "Rockabilly Guy" in 1979.

By 1980 the Polecats had signed to Mercury Records. That same year they released their most successful LP, Polecats Are Go! The band had UK chart success with a David Bowie cover "John, I'm Only Dancing", a reworking of "Rockabilly Guy", and another cover version of the T.Rex song "Jeepster". In 1983, they entered the charts in the United States with their song "Make a Circuit With Me." Shortly after this, John Buck replaced Neil Rooney on drums. Boorer left the group but in the 80's but led a Polecats reunion in 1989, which produced a live album and a new studio set. Raucous Records released a compilation album of Boz Boorer's work entitled Between The Polecats in early 2001. The band continue to tour when time permits, with the most recent gigs being in The Thomas House, Dublin, Ireland in 2011.[1][2]

Boorer, along with guitarist Alain Whyte, joined Morrissey in 1991 when the singer assembled a new band tour in promotion of his album Kill Uncle. Along with Whyte, he is credited with successfully synthesizing jangle pop and American rockabilly to create a new sound for Morrissey that helped to revitalize his career.[3][4] Since 1991, Boorer has worked not only as one of Morrissey's co-writers and guitarists but as the "musical director" of the band as well.

Solo career and other work

Boorer has also found the time to release solo material between his recording and touring. In 2008 Boorer released the album Miss Pearl. Besides having a solo career, writing and playing for Morrissey and touring occasionally with the Polecats, Boorer has also worked with other artists, including Adam Ant, Kirsty MacColl, Joan Armatrading, Jools Holland, and Edwyn Collins. He also worked with his wife's band the Shillelagh Sisters between 1983 and 1998.

In 2009 Boz produced the debut EP by Tiguana Bibles, "Child of the Moon". Boz and Lyn also own a studio in Portugal, Serra Vista Studio which has been extremely busy in 2010. In the Summer of 2010 Boorer recorded, produced and mixed Portuguese garage/blues/rock band Murdering Tripping Blues' second album "Share the Fire".

In August 2012 Boz released his fourth solo album "Some of the Parts" and the single "Slippery Forces" on Fabrique Records. The song "Saunders Ferry Lane" features the vocals of James Maker, "Sunday Morning Coming Down" is a cover of the Kris Kristofferson song, John Moore (of Black Box Recorder, The Jesus and Mary Chain) appears as a special guest on diverse instruments.

Boorer has been married to Lyn for 23 years. They have been together since 1981 and have two daughters: Pearl-May and Billie-Rose.[5]

This article uses material from the article Boz Boorer from the free encyclopedia Wikipedia and it is licensed under the GNU Free Documentation License.