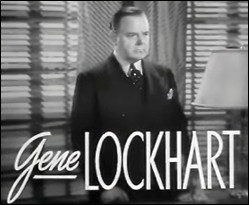 Edwin Eugene Lockhart (July 18, 1891 – March 31, 1957) was a Canadian-American character actor, singer, and playwright. He also wrote the lyrics to a number of popular songs. He became a United States citizen in 1939.[1]

Born in London, Ontario, the son of John Coats Lockhart and Ellen Mary (née Delaney) Lockhart, he made his professional debut at the age of six when he appeared with the Kilties Band of Canada. He later appeared in sketches with Beatrice Lillie.[2]

Lockhart was educated in various Canadian schools and at the London Oratory School in London, England. He also played football for the Toronto Argonauts.[3]

Lockhart had a long stage career; he also wrote professionally and taught acting and stage technique at the Juilliard School of Music in New York City. He had also written theatrical sketches, radio shows, special stage material, song lyrics and articles for stage and radio magazines.

He made his Broadway debut in 1916, in the musical The Riviera Girl.[4] He was a member of the traveling play The Pierrot Players (for which he wrote the book and lyrics). This play introduced the song, The World Is Waiting for the Sunrise, for which Lockhart wrote the lyrics along with Canadian composer Ernest Seitz. (The song was subsequently made popular by Les Paul and Mary Ford in the 1950s.) He wrote and directed the Broadway musical revue Bunk of 1926. He sang in Die Fledermaus for the San Francisco Opera Association. On Broadway, Lockhart originated the role of Uncle Sid in Eugene O'Neill's only comedy, Ah, Wilderness! (1933), and took over from Lee J. Cobb as Willy Loman, during the original run of Death of a Salesman (1949).

However, Lockhart is mostly remembered for his film work. He made his film debut in the 1922 version of Smilin' Through, as the Rector, but did not make his sound debut until 1934 in the film By Your Leave, where he played the playboy Skeets. Lockhart subsequently appeared in more than 300 motion pictures. He often played villains, including a role as the treacherous informant Regis in Algiers, the American remake of Pepe le Moko, which gained him an Academy Award nomination for Best Supporting Actor. He also played the suspicious Georges de la Trémouille, the Dauphin's chief counselor, in the famous 1948 film Joan of Arc, starring Ingrid Bergman. He had a great succession of "good guy" supporting roles including Bob Cratchit in A Christmas Carol (1938) and the judge in Miracle on 34th Street (1947).

Ironically, upon the arrival of Orson Welles in Hollywood in 1940, Lockhart became well known as the author of a short poem satirizing Welles entitled "Little Orson Annie":

Little Orson Annie's come to our house to play
An' josh the motion pitchurs up an' skeer the stars away
An' shoo the Laughtons off the lot an' build the sets an' sweep
An' wind the film an' write the talk an' earn her board and keep;
An' all of us other actors, when our pitchur work is done,
We sit around the Brown Derby bar an' has the mostest fun,
A-listenin' to the me-tales 'at Annie tells about,
An' the Gobblewelles'll git YOU
Ef you DON'T WATCH OUT!

The poem is a parody of the 1885 poem "Little Orphant Annie" by James Whitcomb Riley.

Lockhart is remembered as the Starkeeper in Carousel (1956). Playing a bumbling sheriff, he appeared in His Girl Friday (1940) opposite Cary Grant and Rosalind Russell. He also appeared in the movie The Sea Wolf (1941), adapted from the novel by Jack London, as a ship's doctor. His last film role was that of the Equity Board President in the film Jeanne Eagels (1957).

Lockhart was the husband of Kathleen Lockhart, the father of June Lockhart and the grandfather of Anne Lockhart.

Lockhart died April 1, 1957, from a coronary thrombosis at the age of 65 in St. John's Hospital, Santa Monica, California.[6] He is buried next to his wife in Holy Cross Cemetery, Culver City.

This article uses material from the article Gene Lockhart from the free encyclopedia Wikipedia and it is licensed under the GNU Free Documentation License.