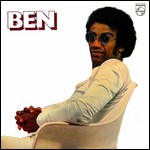 Jorge Duilio Lima Menezes (born March 22, 1942),[1][2] using the stage name Jorge Ben Jor since the 1980s, though commonly known by his former stage name of Jorge Ben, is a Brazilian popular musician. His characteristic style fuses samba, funk, rock and bossa nova with lyrics that blend humor and satire with often esoteric subject matter.[3] Some of his hits include "Chove Chuva," "Mas Que Nada," "Ive Brussel," "Balança Pena," among others, and have been interpreted by artists such as Caetano Veloso, Sérgio Mendes, Miriam Makeba, and Marisa Monte.

Jorge Ben obtained his first pandeiro (Brazil's most popular type of tambourine) when he was thirteen, and two years later, was singing in a church choir. He also took part as a pandeiro player in the blocos of Carnaval, and from eighteen years of age, he began performing at parties and nightclubs with the guitar that his mother gifted him. He was given the nickname "Babulina", after his enthusiastic pronunciation of rockabilly singer Ronnie Self's song "Bop-A-Lena". Was introduced to Tim Maia by Erasmo Carlos.[5] It was at one of those clubs in which he performed that his musical career took off. In 1963, Jorge came on stage and sang "Mas Que Nada" to a small crowd that happened to include an executive from the recording company, Philips. One week later, Jorge Ben's first single was released.

The hybrid rhythms that Jorge employed brought him some problems at the start of his career, when Brazilian music was split between the rockier sounds of the Jovem Guarda and traditional samba with its complex lyrics. But as that phase in Brazilian pop music history passed, and bossa nova became better known throughout the world, Ben rose to prominence.

Holdings both television programs O Fino da Bossa and Jovem Guarda from Rede Record, after being reprimanded by the production of "O Fino da Bossa", chose to participate in the Jovem Guarda, soon after, joined the program Divino, Maravilhoso from TV Tupi, presented by Caetano Veloso and Gilberto Gil.[6]

Jorge Ben's first public appearances were in small festivals organised by his friends, where bossa nova and rock and roll predominated. As with most musicians of the time, Ben was initially influenced by João Gilberto even though he was quite innovative in his own right. The aforementioned song, "Mas Que Nada", was his first big hit in Brazil, and remains to this day the most played song in the United States sung entirely in Portuguese. Outside of Brazil, the song is better known in cover versions by Sérgio Mendes and the Tamba Trio. The song has also been reinterpreted by jazz luminaries such as Ella Fitzgerald, Oscar Peterson, Dizzy Gillespie and Al Jarreau; as well as other samba artists of the time, such as Elza Soares.

His musical work has been vastly sampled by music producers and DJ's, and covered by many bands in a variety of genres such as heavy metal, disco, rock, reggae, jazz, drum and bass, house music and more.

In 1969, Jorge Ben released his self-titled album amid the excitement of the cultural and musical Tropicália movement. The album featured Trio Mocotó as his backing band, who would go on to launch a successful career on the back of their association with Ben. The album was noted for "País Tropical," one of his most famous compositions, although it would be Wilson Simonal who would take his recording of the song to the top of the charts in Brazil that same year. Instead, the song "Charles, Anjo 45", also from the self-titled album, would become Ben's biggest self-performed chart hit of the year.

In the 1970s, Jorge Ben released his most esoteric and experimental albums, most notably A Tábua de Esmeralda in 1974 and Solta o Pavão in 1975. In 1976, he released one of his most popular albums: "África Brasil," a fusion of funk and samba which relied more on the electric guitar than previous efforts. This album also features a remake of his previously released song "Taj Mahal," from which Rod Stewart's 1979 hit "Da Ya Think I'm Sexy? was plagiarized (a matter that he claimed was settled out of court in his favor).

In 1989, Jorge changed his recording label as well as his artistic name, becoming Jorge Benjor (or Jorge Ben Jor). At the time, it was said that there were numerological reasons for his change in name; other sources say it was in response to an incident where some of his royalties accidentally went to American guitarist George Benson.

In 2002, Jorge Ben contributed to the critically acclaimed Red Hot + Riot, a compilation CD created by the Red Hot Organization in tribute to the music and work of Nigerian musician, Fela Kuti, that raised money for various charities devoted to raising AIDS awareness and fighting the disease. He collaborated with fellow hip-hop artists Dead Prez, Talib Kweli, and Bilal to remake the famous song by Fela Kuti, "Shuffering and Shmiling," for the CD.

In 2006, a remake of Ben's "Mas Que Nada" became an international chart hit for Sérgio Mendes with The Black Eyed Peas after being used by Nike in a global TV advertisement during the 2006 FIFA World Cup; this remake (the second time Mendes had covered the track) reached the Top 10 in several European countries, including the UK and Germany, in addition to reaching Number 1 in the Netherlands.

Jorge Ben is also a big fan of Flamengo, a Brazilian football club, located in Rio de Janeiro, which counts Zico, Junior and Leandro among their former star players. Ben's interest in football carries over to his music, as many of his songs deal with the subject, such as "Flamengo," "Camisa 10 da Gávea," "Ponta De Lança Africano (Umbabarauma)," "Zagueiro," and "Filho Maravilha."

On July 7, 2007 he performed at the Brazilian leg of Live Earth in Rio de Janeiro.

This article uses material from the article Jorge Ben Jor from the free encyclopedia Wikipedia and it is licensed under the GNU Free Documentation License.