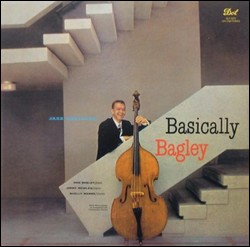 Bagley was born on July 18, 1927 in Salt Lake City, Utah. He received formal training on the double bass. He studied in Los Angeles and played in 1945 with Shorty Sherock and Wingy Manone, and in 1948 with Dick Pierce. From 1950 to 1953 and sporadically thereafter, Bagley played with Stan Kenton; during Bagley's time with Kenton, "A Study for Bass" by Bill Russo and "Bags" by Bill Holman were written to feature Bagley's playing; starting in 1954 he fronted his own ensembles. Between 1950 and 1952 he did extensive work as a session musician with Nat King Cole, Maynard Ferguson, and Dexter Gordon. In the middle of the 1950s he played in Europe with Zoot Sims, Lars Gullin, Frank Rosolino, and Ake Persson. Between 1956 and 1967 he again worked with Kenton and with Les Brown; toward the end of the 1950s he also played with Jimmie Rowles, Shelly Manne, and Phil Woods. In 1957 and 1958 he recorded three albums under his own name. In 1959 he played with Pete Fountain; in 1961 he did a session with Ben Webster. In 1964 he performed in Japan with Julie London. In the 1970s and '80s Bagley composed and arranged for film and television. Between 1976 and 1984 he worked with Burt Bacharach.[1]

This article uses material from the article Don Bagley from the free encyclopedia Wikipedia and it is licensed under the GNU Free Documentation License.

Pjotr Iljitsch Tchaikovsky Capriccio Italien op. 45
Update Required To play the media you will need to either update your browser to a recent version or update your Flash plugin.