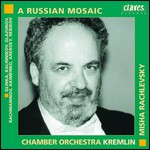 Conductor Misha Rachlevsky was born in Moscow, he began his musical education at the early age of five with violin lessons, he studied at the Moscow Conservatory and the Gnessin Russian Academy of Music in Moscow. In 1973 he left the Soviet Union, working in Israel, South Africa and in Canada. In 1976 he settled in the United States. Later he founded the New American Chamber Orchestra (NACO). In 1989 Rachlevsky moved to Spain and later back to Moscow, where he created Chamber Orchestra Kremlin.

This article uses material from the article Misha Rachlevsky from the free encyclopedia Wikipedia and it is licensed under the GNU Free Documentation License.

Giovanni Gabrieli Gloria
Update Required To play the media you will need to either update your browser to a recent version or update your Flash plugin.