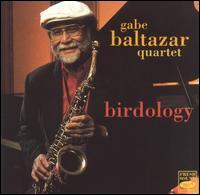 His mother, born Chiyoko Haraga on a Hawaii sugar plantation, was the daughter of Japanese immigrants who came to Hawaii to work on the plantations around 1900. His father, Gabriel Baltazar Sr., was born in Manila in 1906 and came to the United States to work as a musician in the mid-1920s. Gabe started playing reed instruments while the his younger brother Norman Baltazar took up the trumpet.

Gabe Baltazar was first playing music at the age of eleven when he was started on the Eb Clarinet, later he would switch to alto saxophone. There were numerous big bands stationed at Hickam Field during this time (WWII) and Baltazar got to hear Artie Shaw, Sam Donahue, and Claude Thornhill. [2] Batlazar's main influences growing up were Benny Carter, Lester Young, Coleman Hawkins, Willie Smith and Johnny Hodges. By age 16 (1946) he had already been playing professionally for two years and was first introduced to Charlie Parker's playing by jazz trombonist Frank Rehak.[2]

After his graduation from McKinley High School in 1948, he went to stuy at Interlochen for eight weeks in the summer. Gabe Baltazar then moved to the U.S. mainland from Hawaii to attend Peabody Conservatory in Baltimore, Maryland for two years.[2] [3] Baltazar notes his meeting with Charlie Parker during a visit to New York in 1948 as one of the biggest musical inspirations of his life. He questioned Parker extensively during this meeting and it would become an inspiration for his own playing to closely resemble that of the famed alto saxophonist.[3]

Baltazar spent a brief unrecorded period in 1959-60 with the Lighthouse All-Stars. He was heard and worked for numerous players and contractors in the Los Angeles area by this time eventually being offered the lead alto sax chair with Kenton. From 1960 to 1965 he gained international recognition as a world class jazz artist with Kenton recording on 17 critically acclaimed LP's to include backing singers such as Nat King Cole, Jean Turner, and Ann Richards.[4] During this period he recorded a number of well-regarded solos with what would be known as the Mellophonium Bands; his most notable improvisations being from Kenton's Grammy winning albums Kenton's West Side Story and Adventures In Jazz and also on the CD Adventures In Time. One other interesting Baltazar solo that stands out from the Kenton recordings is on Johnny Richards' composition Wagon which did not get issued until the early 1970's on a Capitol LP compilation; Wagon is part of the extra material re-issued onto the Cuban Fire! CD. Baltazar is widely known as one of the last great jazz soloists of that era of Kenton orchestras having played on the band with artists such as Marvin Stamm, Sam Donahue, Dee Barton, Carl Saunders, and Don Menza.

After leaving the Kenton organization, Baltazar worked with Terry Gibbs in 1965, and recorded with Gil Fuller, Dizzy Gillespie, James Moody, Onzy Matthews, and Oliver Nelson. Between 1965 and 1969 he worked extensively in the Los Angeles recording studios, principally for NBC, where he played in the television orchestras for The Pat Boone Show, The Jerry Lewis Show, The Beautiful Phyllis Diller Show, The Tonight Show with Johnny Carson, The Smothers Brothers Show, and The Glen Campbell Goodtime Hour.

Baltazar returned home to Hawaii in 1969 to rejoin and then become assistant director of the Royal Hawaiian Band. Except for a noted recording done at Capitol Studios which become the last LP Stan Kenton and Creative World would produce just before Kenton's death in 1979 (Stan Kenton presents Gabe Baltazar), his name was scarce during this time in the continental United States as a jazz soloist. Baltazar held the position with the Royal Hawaiian Band until 1985 when he retired from civil service. In the 1990s, Baltazar visited California often, to be bandleader and record jazz CDs for the Fresh Sounds and V.S.O.P. labels.

This article uses material from the article Gabe Baltazar from the free encyclopedia Wikipedia and it is licensed under the GNU Free Documentation License.

Johann Sebastian Bach Violinkonzert a-moll BWV 1041
Update Required To play the media you will need to either update your browser to a recent version or update your Flash plugin.