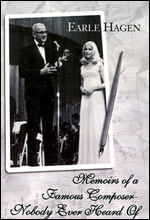 Earle Harry Hagen (July 9, 1919 May 26, 2008) was an American composer who created music for movies and television. His best-known TV themes include those for Make Room For Daddy, The Dick Van Dyke Show, I Spy, That Girl and The Mod Squad. He is also remembered for co-writing and whistling "The Fishin' Hole", the melody of the main theme to The Andy Griffith Show, the instrumental classic "Harlem Nocturne" used as the theme to television's Mickey Spillane's Mike Hammer, and co-wrote the theme song to Tim Conway's Western comedy Rango.[1][2]

Born in Chicago, Illinois, as a boy he moved with his family to Los Angeles, California, where he learned to play the trombone in junior high school, and graduated from Hollywood High School. He left home to join traveling big bands, at age 16, and played with Tommy Dorsey, Benny Goodman and Ray Noble. While with Noble he wrote "Harlem Nocturne", on the road in 1939, as a tribute to Duke Ellington and Johnny Hodges.[1][3] The piece was recorded by several artists, including Earl Bostic, The Viscounts, Sam Taylor, Herbie Fields, Randy Brooks, and The Lounge Lizards, and was later used as the theme to television's Mickey Spillane's Mike Hammer.

In order to make extra money he began teaching trombone in the 1930s. He went to work for CBS in 1940, as a staff musician, but then enlisted in the military in 1941. Hagen was an orchestrator and arranger for motion picture studio 20th Century Fox in 1940s and early 1950s, and worked on films like Call Me Madam, Gentlemen Prefer Blondes and Carousel. He began writing for television when he left Fox in 1952 with partner Herbert W. Spencer. The two did the musical score for Janis Paige's short-lived situation comedy, It's Always Jan, which aired in the 1955-1956 season on CBS. Hagen met television show producer Sheldon Leonard when he scored the Danny Thomas series Make Room for Daddy.[1][3]

Hagen's most ambitious body of work, however, came from his work on I Spy, for which he won an Emmy in 1968. Sheldon Leonard, the producer and creator of I Spy, bucked the trend of using canned music for television shows and instead decided to create original soundtracks for every episode. Since every episode of I Spy was set in a different location, Hagen made liberal use of world music in his soundtracks which were mostly written and performed within the West coast jazz genre. (Hagen did not claim the West coast jazz affiliation for himself, instead inventing the term "semi-jazz," which he defined as a union of global themes with American jazz.)

Other television theme songs that Hagen composed were the themes for My Sister Eileen, The Dick Van Dyke Show, Gomer Pyle - USMC, That Girl (along with I Spy Thomas and Leonard productions), Eight Is Enough, and The Mod Squad.[1][4]

At the end of his life he continued teaching and wrote books on music arranging and scoring. Sometimes his only fee was a box of golf balls because of his passion for golfing.[1] He wrote one of the first textbooks on scoring, Scoring for Films: A Complete Text, and Memoirs of a Famous Composer Nobody Ever Heard Of was his autobiography published in 2000.[3] One of his students was fellow Emmy-winning composer and orchestrator Harvey Cohen.[5]

Hagen was married for 59 years to Elouise "Lou" Sidwell, a former big-band singer, until her death in 2002. They had two sons, James and Deane Hagen. He married his second wife, Laura, in 2005.[1]

Hagen died of natural causes in Rancho Mirage.[1] He is buried at Desert Memorial Park in Cathedral City, California.

Hagen had a Golden Palm Star on the Palm Springs Walk of Stars dedicated to him in 2003.[6] He was inducted into the Television Academy Hall of Fame in 2011.

This article uses material from the article Earle Hagen from the free encyclopedia Wikipedia and it is licensed under the GNU Free Documentation License.