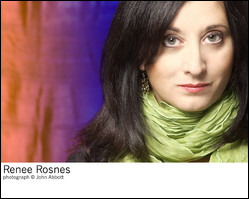 Rosnes grew up in North Vancouver, B.C., where she attended Handsworth Secondary School. She was three when she began taking classical piano lessons. She became interested in jazz music in highschool, introduced to it through her band director Bob Rebagliati. She then attended the University of Toronto, where she pursued classical performance with pianist William Aide. In 1985, Rosnes was awarded a Canada Council of the Arts grant, and moved to New York City to further her studies.[1] After saxophonist Joe Henderson hired her to play with his quartet in 1986, she began an international career. In 1988, she was a member of the Wayne Shorter Band and in 1989, she joined trombonist JJ Johnson's Quintet and remained his pianist of choice until he retired in 1997. In 1989, she also began working with tenor master James Moody and was the pianist in his quartet for the next 20 years.[2][3] Rosnes frequently performs with vibraphonist Bobby Hutcherson, and recorded "For Sentimental Reasons" with his quartet in 2007.[4] Rosnes was a founding member of the SFJAZZ Collective, and played with the all-star octet from 2004 through 2009.[5]

As a leader, Rosnes has released twelve recordings, nine of which are on the Blue Note Records label. The most recent (from 2010) is "Manhattan Rain" (Pony Canyon Japan), featuring Steve Nelson on vibes, Rich Perry on tenor sax, Peter Washington on bass and Bill Stewart on drums. She also made four Japanese trio recordings for the VideoArts label with The Drummonds, featuring herself, drummer and ex-husband Billy Drummond and the unrelated Ray Drummond on bass.[6]

This article uses material from the article Renee Rosnes from the free encyclopedia Wikipedia and it is licensed under the GNU Free Documentation License.