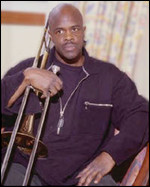 Craig S. Harris (born September 10, 1953) is a Jazz trombonist and composer who has been a major figure in the jazz avant-garde movement since his stint with Sun Ra in 1976. Subsequently, Harris has worked with such notable jazz artists as Abdullah Ibrahim, David Murray, Lester Bowie, Cecil Taylor, Sam Rivers, Muhal Richard Abrams and Charlie Haden. Harris has also recorded since 1983 as leader for labels like India Navigation, Soul Note and JMT. For the latter he recorded with two different groups: the Tailgaters Tails was a quintet with clarinetist Don Byron, trumpeter Edward E. J. Allen, Anthony Cox on bass and Pheeroan akLaff on drums. His large ensemble project Cold Sweat was a tribute to the music of James Brown.

Harris was born in Hempstead, New York, and is a graduate of the music program of State University of New York College at Old Westbury, was profoundly influenced by its founder and director Makanda Ken McIntyre. Craig's move to New York City in 1978 quickly established him in the forefront of young trombonists such as Ray Anderson, George Lewis and Joseph Bowie.[1]

He first played alongside another of his teachers at SUNY, baritone saxophonist Pat Patrick in Sun Ra's Arkestra for two years. Harris than embarked on a world tour with a South African pianist/composer named Abdullah Ibrahim (Dollar Brand) in 1981. While on tour in Australia Harris discovered the Indigenous Australian wind instrument, the didgeridoo, which he added to the collection of instruments he plays.

This article uses material from the article Craig S. Harris (trombonist) from the free encyclopedia Wikipedia and it is licensed under the GNU Free Documentation License.

Georg Christoph Wagenseil Allegro assai aus dem Konzert für Altposaune Es-Dur
Update Required To play the media you will need to either update your browser to a recent version or update your Flash plugin.