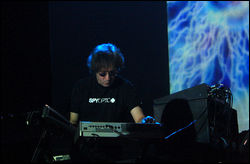 Richard Barbieri (pronounced bahr-bee-air-ee) (born 30 November 1957, in London, England) is an English synthesizer player, keyboardist and composer. He was educated at Catford Boys' School, Catford, South East London. Originally coming to prominence in the late-1970s and early-1980s as a member of new wave pioneers Japan (and their brief 1989-1990 reincarnation as Rain Tree Crow), he is now best known as the keyboard player in the progressive rock band Porcupine Tree, of which he has been a member since 1993.

Despite being known for work in bands with prominent musicianship, Barbieri's key skill lies not in virtuoso instrumental performance, but in developing and processing synthetic electronic sound. This is either generated entirely by keyboard input or by processing a sound source from a musical collaborator. He has cited Karlheinz Stockhausen as a central influence, and his approach could also be compared to similar "non-virtuoso" art rock musicians such as Brian Eno.

During his time with Japan, Barbieri worked (with the assistance of lead singer/occasional keyboard player David Sylvian) on programming the band's analogue (and early digital) synthesizers to create original sounds and textures. On record, these were played by whichever member of Japan could interpret the performance best (generally drummer Steve Jansen, as "he had the best timing.") Barbieri would, however, perform the bulk of the keyboard playing live. His keyboard-playing role in Porcupine Tree is similarly split with frontman/producer Steven Wilson, with Barbieri processing the sound of other musicians in the band as well as playing more orthodox keyboard parts.

Despite his emphasis on sonic experimentation, Barbieri is also an accomplished keyboard player who has become more overtly traditional in his playing during his sixteen years with Porcupine Tree (and who currently plays electric and acoustic pianos and Mellotrons in addition to his analogue-styled synthesizer work).

Barbieri started his musical career with the group Japan in 1974. Within a year the band was signed to the Hansa/Ariola label and began work on a debut album, which received severe criticism from the UK music press on its release.

Although initially perceived as a "hyped" band, Japan went on to record five studio albums culminating in the groundbreaking Tin Drum which stayed in the UK Albums Chart for a year. The painstaking approach to synthesizer programming by Richard Barbieri and David Sylvian on top of the original rhythmic patterns of Steve Jansen and Mick Karn produced a sound that remains original to this day. They were one of the most successful chart bands in Europe and Asia in 1982 despite the increasingly experimental nature of their music. The band split up in November 1982 at the height of their popularity after a world tour that year.

From 1983 onwards, Barbieri has been a regular contributor of his unique soundscapes and synth textures to the albums of various other musicians.

After the break-up of Japan, Barbieri continued his association with David Sylvian, playing on the latter's early solo albums (and on the 1986 In Praise Of Shamans tour). During this time he worked alongside such other innovators as Holger Czukay, Ryuichi Sakamoto and Robert Fripp.

In 1987 he started a long musical association with another Japan colleague, Steve Jansen. This has produced six collaborative albums to date, initially under the name The Dolphin Brothers (Catch the Fall, 1987) and later as Jansen & Barbieri (including Stories Without Borders, 1993,Worlds in a Small Room, 1996, and Stone to Flesh, 1997).

In late 1989, the members of Japan (minus guitarist Rob Dean) reunited under the name Rain Tree Crow to make new recordings for Virgin. This resulted in a single eponymous album which extended the work of late Japan and the solo/collective work of all four members, featuring a variety of influences from pop to art rock, jazz, ambient and world music. Other contributors to the album included Bill Nelson. Rain Tree Crow charted in 1991 and brought critical acclaim.

The Rain Tree Crow collaboration was short-lived due to David Sylvian's assumption of control over the project (which he claims was necessary for financing but which the other members saw as controlling arrogance). The group parted company shortly after recording the album, for which there was no supporting tour. However, the project was key to the reuniting of Jansen, Barbieri and Karn as a creative unit (sometimes referred to as "JBK").

The next work by Jansen, Barbieri and Karn was as the rhythm section for British art-pop band No-Man, who recruited them for a 1992 UK tour and for recordings which later appeared on the Loveblows & Lovecries album and on the "Painting Paradise" and "Sweetheart Raw" EPs (one of these EP pieces, the 20-plus-minute "Heaven Taste", later appeared on the album of the same name). This marked Barbieri's first work with Steven Wilson, whom he would then go on to work with in Porcupine Tree.

In 1993 Barbieri formed the Medium Productions label in 1993 with Jansen and Karn. Their objective was to enable themselves to create music and collaborate with fellow musicians on projects without record company interference and restriction. They kicked off the label with the Jansen/Barbieri/Karn album Beginning to Melt (a collection of varied pieces including some trio work and other recordings featuring various permutations of the basic trio with other collaborators including David Torn and Robbie Aceto). Thirteen diverse albums were released during a ten-year period; Jansen and Barbieri's collaboration with DJ Takemura on the album Changing Hands being one of the highlights.

During this period Barbieri also made two other collaborative albums, one with his wife Suzanne J. Barbieri under the name Indigo Falls (1996), and one with Tim Bowness from the band No-Man titled Flame (1994).

In late 1993 Barbieri joined the progressive rock band Porcupine Tree (having previously played as a guest performer on the album Up the Downstair). The band released eight studio albums to increasingly greater chart success, and toured in support of many of them. Initially employing many aspects of psychedelic rock, they later transitioned to a more pop oriented style before settling on progressive metal. Their first major success was the album In Absentia, which enjoyed chart success around Europe with sales of over 120,000. The following studio albums Deadwing and Fear of a Blank Planet met even greater success, charting highly worldwide. Increased radio airtime and favourable mainstream magazine reviews and interviews further increased their public exposure. The band transitioned somewhat away from metal with their last album, The Incident, with leader Steven Wilson expressing a desire to enter a different genre. They are currently inactive, though with plans to eventually reform.

The new album 'Not The Weapon But The Hand' from Steve Hogarth and Richard Barbieri was released by Kscope Records February 2012. Hogarth is best known as the frontman of Marillion.

'Not The Weapon But The Hand' was completed in late 2011 and features appearances from Danny Thompson on double bass, Arran Ahmun (John Martyn) and Chris Maitland (ex Porcupine Tree) on drums and Dave Gregory (XTC) on guitar, bass and string arrangements.

Aside from recording and touring, Barbieri has written articles on analogue synthesis for various publications; composed music for film; programs for music software and synthesizer manufacturers. He regularly guests with The Bays, an electronic improvisational group. He also undertakes occasional keyboards duties for the live outings of Marillion's vocalist Steve Hogarth's fronted H-Band, appearing on the 2002 Album 'Live Body, Live Spirit'. Recent highlights include two Radio One sessions for the late John Peel and concerts at the Queen Elizabeth Hall and Brighton Dome.

In 2005 he released his debut solo album Things Buried. Although he has made many albums as part of a group, trio or duo, surprisingly this is his first solo work. The instrumental album also features the distinctive performances of Andy Gangadeen on acoustic and electronic drums, and Percy Jones on fretless bass.

with The Dolphin Brothers

This article uses material from the article Richard Barbieri from the free encyclopedia Wikipedia and it is licensed under the GNU Free Documentation License.

Theodor Kirchner Präludium op. 9 Nr. 8, Allegro comodo
Update Required To play the media you will need to either update your browser to a recent version or update your Flash plugin.