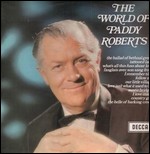 John Godfrey Owen "Paddy" Roberts (1910 - 24 August 1975)[1] was a South African songwriter and singer, having previously been a lawyer and a pilot (serving with the RAF in World War II). He then joined BOAC and flew Lockheed Constellations for that airline in the late 1940s/1950s.

Roberts, who was born in Durban, South Africa, enjoyed success with a number of songs in the 1950s and 1960s and wrote songs for several films. He released several LPs and EPs of his own material, often featuring what were, for the time, slightly risqué lyrics. One of his most popular and amusing compositions that he recorded himself was entitled "The Ballad Of Bethnal Green" which was also recorded by Beatrice Lillie.[2] Roberts was five times the winner of an Ivor Novello Award, four for songwriting and one for services to the British Music Industry. He co-wrote the UK chart-topper, "Softly, Softly", as sung by Ruby Murray and "Lay Down Your Arms" by Anne Shelton which reached No. 1 in the UK charts in 1956.

Many of Robert's recordings were made available in the United States. "Merry Christmas You Suckers" was issued with an alternative title of "And A Happy New Year".

Although most the albums were only issued in mono, it appears that the studio albums at least were recorded in stereo. The tracks from Strictly For Grown Ups that are included on The World Of Paddy Roberts" are in stereo, leading to the assumption that the whole album was recorded that way (but never issued that way). Songs for Gay Dogs was issued in stereo for the first time in 2006 when released on CD which indicated that ...But Not In front Of The Children was also recorded that way.

The musical director on most recordings was Dennis Wilson. The exceptions being Songs For Gay Dogs (Peter Knight), Funny World (Ronnie Aldrich), Live at the Blue Angel (Barry Morgan) and Doctor Dolittle (Cyril Stapleton). The director for "Love Is A Wonderful Thing" / "Send For Me" was Johnny Pearson. There is no director listed for his MFP album.

All Decca Material with the exception of ...But Not In front Of The Children and Funny World was produced by Hugh Mendl.

Strictly For Grown Ups has also been released without Paddy Roberts Tries Again, but with various other Roberts compositions sung by others on MCSR 3046.

This article uses material from the article Paddy Roberts (songwriter) from the free encyclopedia Wikipedia and it is licensed under the GNU Free Documentation License.