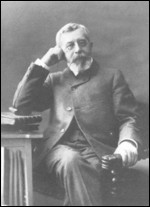 Claude-Paul Taffanel (16 September 1844 - 22 November 1908) was a French flautist, conductor and instructor regarded as the founder of the French Flute School that dominated much of flute composition and performance during the mid-20th century.

Born in Bordeaux, France, Taffanel received his first lessons on the flute from his father at the age of nine. After giving his first concert at the age of ten, he studied with Louis Dorus at the Paris Conservatoire. Once he graduated in 1860, he won his first of several awards for flute performance at age sixteen. Taffanel built a substantial career as both soloist and orchestral player over 30 years, becoming known as the foremost flautist of his time and reestablishing the instrument in the mainstream of music.

In 1893, Taffanel became Professor of Flute at the Conservatoire.[1] As Professor, he revised the institute's repertoire and teaching methods, restructuring the traditional masterclass format to give students individual attention while building a reputation as an inspiring teacher. He instructed his students to play in a new, smoother style that included a light and carefully modulated vibrato.

Taffanel also revamped the required repertoire for his Conservatory students. Beginning in 1894, he replaced much of the 19th-century music his student Louis Fleury called "idle twittering" with works by Johann Sebastian Bach and other composers of the 18th century. Until then, French musicians (save for a handful of organists) had ignored the Bach revival that had swept England, Germany and Austria. Alfredo Casella, who had studied Bach in Italy before coming to Paris, noted that none of his classmates at the Conservatoire knew that composer's music.

Taffanel toured widely in Europe. This placed him ahead of his contemporaries in awareness of baroque repertoire. (His tours had included playing Mozart concertos at the Gewandhaus in Leipzig, a singular honor for a French performer.) Thanks to this awareness, Taffanel's impact on the early music revival in France cannot be overestimated. Louis Fleury writes,

Bach's sonatas, those wonders, long buried in the dust of libraries, awakened to find a real interpreter [in Taffanel]. He was the first, at any rate in France, to find out the meaning of these works, which his colleagues thought dull and badly written for the instrument ... It is a fact, though hardly credible, that down to 1895 Bach sonatas were not taught in the flute class (under Altes) at the conservatoire.[2]

His work sparked and helped fuel a growing interest in France in early music, with editions such as Saint-Saëns' of music by Jean-Philippe Rameau. In 1897, Taffanel also became head of the orchestra class at the Conservatoire.

In addition to his teaching duties, Taffanel became an important opera and orchestra conductor, serving from 1890 to 1906 as chief conductor at both the Paris Opéra and the Société des Concerts du Conservatoire. Previously these positions had been awarded to string players; Taffanel was the first flautist to hold them. Taffanel's duties at the Opera included directing all new productions, among which during his tenure were French premieres of various Wagner operas and Verdi's Otello. At the Societe des Concerts Taffanel championed Camille Saint-Saëns and other contemporary French composers. He also gave the world premiere of Verdi's Quattro Pezzi Sacri. He revised the conservatory's repertoire and teaching methods, putting the music of other, foreign composers, including Bach, back into the institute's repertoire.

Chamber music did not escape Taffanel's attention. Founding the Société de musique de chambre pour instruments à vent (Society of Chamber Music for Wind Instruments) in 1879, he revived the wind ensemble music of Mozart and Beethoven while also encouraging the composition of many new works, including Charles Gounod's Petite symphonie. In addition, during the 1880s, Taffanel participated in "historic" concerts, playing his Boehm flute alongside viola de gamba and harpsichord in performances of baroque music.

Taffanel was also a fluent composer for the flute and wind quintet, writing several pieces considered part of standard flute repertoire today. These include:

He also began writing a method book for flute, 17 Grands Exercices Journaliers De Mecanisme, which was finished after his death by two of his students, Louis Fleury and Philippe Gaubert. Today, this is considered a standard method book for flute players to study from. Gaubert became the second (after Taffanel) most recognized French flutist and composer.

Taffanel came at a crucial moment in the flute's history, after Theobald Boehm had completely remodeled the instrument. He proved the flute fully capable of elegance and extreme expressivness. At the same time, the credo later advocated by the French Flute School that tone quality was more important than loudness did not always hold true for him. His low register was often described as "powerful and brassy", "ample" or "full." This may have been due in part to Parisian audiences of the period. They expected the flute, along with all the woodwinds, to play with assertiveness. When Hans von Bülow conducted the Berlin Philharmonic in Paris, critics and audiences alike criticized the tone of the wind instruments as being too small.

Barrère recalled in 1921 that quality and quantity of tone, as well as fine technique, were not all that set Taffanel's playing apart. Fleury added,

Elegance, flexibility, and sensitivity were the hallmarks of Taffanel's artistry, and his phenomenal virtuosity was made as inconspicuous as possible. He hated affectation, believing that the text of the music should be respected absolutely, and beneath the supple fluency of his playing there was a rigorous adherence to accuracy of pulse and rhythm. [4]

"Rigorous adherence" is a relative term here. By the standards of his time, Taffanel's pulse and rhythm were free from exaggeration. As rhythmic interpretation became more literal in 20th century practice, recordings of Taffanel's contemporaries came to sound relatively free and loose.

Another aspect of flute playing which Taffanel changed was his use of vibrato, which differed markedly from the standards later developed by the French Flute School. The Taffanel-Gaubert Méthode discouraged vibrato, especially in playing early music. Taffanel himself, however, employed "a light, almost inperceptible vibrato", according to Fleury. [5] Another pupil, Adolphe Hennebains, goes into more detail:

When he spoke to us of notes with vibrato or expression, he told us which a mysterious air that these notes, forte or piano, seemed to come from within himself. One had the impression that they came directly from the heart or soul.[6]

Gabriel Fauré dedicated his Fantasie to him, Charles-Marie Widor dedicated his Suite, Opus 34 to him, and Pyotr Ilyich Tchaikovsky intended to write him a flute concerto shortly before his death. Also the Romanian composer George Enescu dedicated his Cantabile and Presto to Taffanel.

This article uses material from the article Claude-Paul Taffanel from the free encyclopedia Wikipedia and it is licensed under the GNU Free Documentation License.