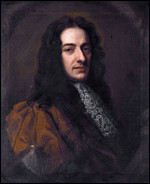 Nicola Matteis (Matheis) (fl. c. 1670 after 1714[1]) was the earliest notable Italian Baroque violinist in London, whom Roger North judged in retrospect "to have bin a second to Corelli," and a composer of significant popularity in his time, though he has been utterly forgotten until the later 20th century.[2]

Very little is known of his early life, although Matteis was probably born in Naples, describing himself as 'Napolitano' in several of his works. He came to London in the early 1670s and according to the diarist Roger North, had a city merchant as a sponsor, who schooled him in the ways of currying favor from the gentry (by allowing them to accompany him in parlor recitals and other minor performances).[3] John Evelyn reports in his diary for 19 November 1674, the earliest notice of Matteis, "I heard that stupendious Violin Signor Nichola (with other rare Musitians) whom certainly never mortal man Exceeded on that instrument, he had a stroak so sweete, & made it speake like the Voice of a man; & when he pleased, like a Consort of severall Instruments: he did wonders upon a Note: was an excellent Composer also. Nothing approch'd the violin in Nicholas' hand: he seem'd to be spiritato'd & plaied such ravishing things on a ground as astonishd us all."[4] Matteis enjoyed great artistic and commercial success with his published music, notably four books of Ayres (1676, 1685), but married a rich widow in 1700 and retired from the London musical scene;[5] according to North he nevertheless ended his days in ill health and poverty.[6]

Matteis is credited with changing the English taste for violin playing from the French style to a newer, Italian one. Contemporaries described him as using a longer bow, with a new bow hold (closer to that used by modern players). His reputation grew through his lifetime and resulted in high praise for his live performances (in concert, audiences were often certain that more than one violin was being played) and widespread popularity for his music. Knowing many of his customers were amateurs, Matteis tended to give precise instructions in the prefaces to his published Ayres, providing detailed notes on bowing, explanations of ornaments, tempos, and other directions. These notes have proved valuable resources for scholars reconstructing the performance practices of the time.

This article uses material from the article Nicola Matteis from the free encyclopedia Wikipedia and it is licensed under the GNU Free Documentation License.

Antonin Reicha Quintett B-Dur für Fagott und Streicher
Update Required To play the media you will need to either update your browser to a recent version or update your Flash plugin.